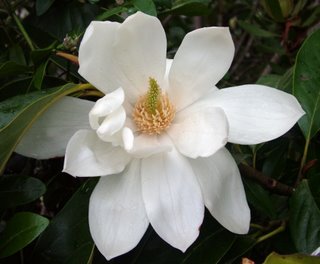 This plant photography business can be a very dangerous one, as I discovered this morning as I walked to work.
For the past few weeks I have been keeping an eye on a wonderful Michelia doltsopa as it comes into flower. It is a semi-mature tree – about three meters high – and the flowers have been delightfully scented and, unusually in our climate, free from blemish. They have also been too high on the tree for me to photograph from the footpath. Each day I look, hoping to find just one flower that is both clean enough and low enough for me to take a photograph.
Today was the day. There was a new flower, nestled in the leaves of the lower growing plants. It was just what I had been waiting for, so I took my camera out of my bag – it always accompanies me on my meanderings – and took a number of photographs.
I also took pictures of the white Chaenomeles that grows alongside it, and the lovely light pink camellia in the same garden.
I was feeling very pleased with myself. I had taken my photographs and was back on my way to work when I heard some noise over the sound of National Radio playing from my MP3 player.
I turned around and saw a middle-aged lady, immaculately dressed in black from head to toe, waving and chasing after me. I recognised the lady as the mother of a young man who had helped me research for my book on the streets of our town when he was about twelve, and who shares my first name. She is also a friend of a lady who used to work for me at the archive, having worked as a teacher with my assistant’s husband. She now works at a local private girls’ school.
I smiled, expecting her to have news of Gareth or Pam. Instead she asked me if I had taken some photographs.
I must have looked a little bewildered, but answered that I had indeed taken some photographs of the flowers just down the road.
Then she asked if I had taken photographs the week before.
I answered that indeed I had. I had photographed the Viburnum tinus in flower along the school’s front boundary, and had also photographed a Magnolia ‘Vulcan’ that was growing in a neighbouring garden.
She smiled and apologised for hounding me. It seems that some of the boarders (forgive the pun) at the school had seen me photographing the shrub in the border, and with the fertile imagination that seems to be reserved for thirteen year old girls cloistered in unhealthily large numbers, had decided that I was some kind of sexual pervert and that I was photographing the school. Perhaps they thought I was stalking someone – I don’t know.
The teacher was amused that the photographer should have turned out to be me, and rushed away to explain to the girls that there was nothing to worry about.
I am jot sure how I feel about it all. I guess I should just be more careful, and, on reflection, maybe it wasn’t the brightest thing in the world to do to take photographs outside a girls’ school. But really – get grip girls.
It’s all about the flowers!
Posted by Archivist at 9:04 AM

Anyone who wants to grow healthy plants should know that location is one of the most important factors that governs successful growth of plants. Most people buy a plant, go out into the garden, dig a hole somewhere, and place the plant in the soil: and when the plant fails to grow, they blame the nursery or soil. Site selection is vital if you want your plants to grow and thrive. Choosing the best site can save a lot of frustration and headaches.
tree nursery