As gay as a row of pink tents 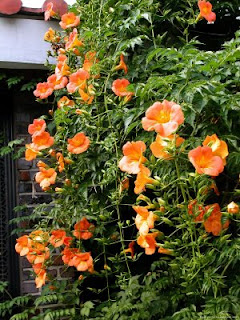 The Head Gardener has a theory about my passion for small bulbs and rock plants. She reckons the plants I like have such long Latin names that I have to have labels that are larger than the plants. I think the final straw for her was the pretty little annual American daisy I grew – called Haplopappus phyllocephalus. I told her the first name meant “happy” (or at least sounded like it) and the second part meant “head”, so she should just call the plant “happy head” or “smiler”.
Some plants, though, have names that reflect their nature perfectly – although it is not always intentional. Take that flamboyant climber, the Campsis. Its name comes from a Greek word for “something bent”, an allusion to the curving stamen, but the flowers on this vigorous climber are as camp as a row of pink tents. Perfectly named, if you ask me.
There are only two species of Campsis in the wild, both Northern Hemisphere climbers of woodlands. They are strong growing plants and need a little bit of care in smaller gardens, but in an area where they can be allowed to grow almost unchecked, they will flounce about with gay abandon, giving an amazing display of orange or yellow flowers during the hot months of the year.
Despite being woodland plants in the wild, they will grow well in full sun, and free draining soil. Remarkably, they are very tolerant of salt winds, so they are a popular plant for the seaside.
They can be pruned rigorously if their natural exuberance needs controlling.
A suburban garden near my first garden had a remarkable example of this. It featured Campsis growing up some verandah poles. Each winter, when the plant lost its leaves, the owner used to trim the whole plant back to the stems. Each spring it would bounce into growth again, and flower profusely over the summer, before being trimmed back to its bare state in winter.
You do have to be a bit careful about digging around the roots though. If you cut a root you will have a new plant or two – a great easy way to propagate if you are a nurseryman, but a potential nuisance in the garden.
There is another potential problem with this plant. It is a self-supporting climber. It produces aerial roots which cling to branches or netting – but they will also work their way into masonry, so do not plant these climbers against a brick wall.
The two most common forms seen in New Zealand are ‘Madame Galen’ and ‘Guilfoeyli’ and I have sent hem described as C. radicans, and also as forms of the Chinese Trumpet Vine, C. grandiflora.
They are actually both varieties of the hybrid between the two species, C. x tagliabuana – and I am sorry about the Latin name again. The “tagliabuana” bit comes from some well-known Italian gardeners, the Tagliabue brothers, who first crossed the two species.
‘Guilfoeyli’ is an Australian raised variety with panicles of about ten orange-red trumpet flowers through late summer, while ‘Madame Galen’ has flowers more in the orange-yellow range.
There is also a lovely yellow form of the species C. radicans, sometimes seen – it is nowhere near as common – called ‘Flava.’ The flowers are smaller than the hybrids, and its seems the plant is a little less vigorous.
Posted by Unknown at 1:13 PM