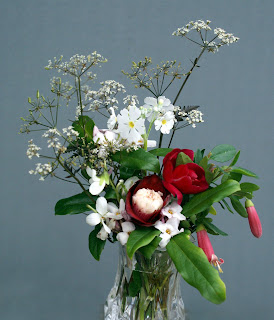 I spent some of this weekend pruning my roses, and giving some of the flowerbeds a general cleanup, and as I went I picked a little posy of flowers for my office. I was pleasantly surprised at how much out in the middle of winter.
The Daphne bholua in the Head Gardener’s border is almost at the peak of its flowering. This is a Himalayan species that has only been commonly found in New Zealand gardens for about twenty years. The forms from the highest parts of the Himalayas are deciduous, especially in colder climates, while those from the slighter warmer areas of the mountains are evergreen. I have grown a couple of different varieties in my garden and both stayed evergreen in our climate.
If you are only familiar with the “common Daphne”, D. odora, this species will come as a bit of a surprise. Instead of the slightly untidy, sprawling habit of D. odora, D. bholua has upright growth and can reach as tall as three metres high, although our plants seem to have topped out at about two metres. It is a tidy growing plant with attractive foliage, not shiny and longer than D. odora. If you want to keep it lower growing, it responds well to being trimmed – it can be cut back harder than common daphne, which does not like anything other than a light trim.
The whiter flowers, tinged with pink, have a lovely scent, reminiscent of D. odora, but not as strong. I love having a sprig or two of it on my desk, whereas I find D. odora too overpowering in close contact.
The Head Gardener has another winter-flowering shrub growing at the feet of the daphne – Correa ‘Dusky Bells’.
The Correas are underrated little Australian shrubs. There are about 11 species, but there is a lot of variation among the forms and it is quite likely that a detailed survey would result in more species being attributed.
‘Dusky Bells’ is probably a hybrid between C. reflexa and C pulchella. It will grow to about a metre high, with a similar spread, although it is usually confined to a lesser height. It carries drooping carmine-pink flowers through winter and into spring, and is at least hardy enough to cope with our garden, where it gets its share of frost. It can cope with full sun – Correas were once very popular in pebble gardens – but probably does best with some shade. It will grow well in moist soils.
Posted by Unknown at 7:49 PM