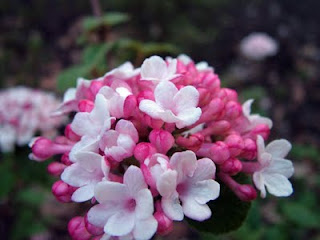 I took a lovely walk through our local park at lunchtime last week. My primary purpose was to go and check on the irises growing in the bed my grandmother donated to the town many years ago. I had weeded the bed a few weeks before, and knew the first of the flowers would nearly be out. Sure enough, there were a few flowers on the lovely gold and yellow form of Iris bucharica. This pretty species is the easiest of the Juno section – bulbs, but with persistent roots. It will grow in any well-drained soil and a sunny site, and is great for flowering in early to mid spring.
But it was not the irises that really took my eye – or my nos. It was one of the deliciously fragrant Viburnums wafting its delicious scent around the sheltered part of the park where it was growing.
I had been in a friend’s garden earlier in the week and was amazed to see four or five V. x burkwoodii growing around a relatively small garden. My friend loves scent and her garden featured a number of Michelias in heavy bud, so I can only imagine how fragrant her garden will be in a week or so.
V x burkwoodii is undoubtedly the most popular of the scented Viburnums. It has tight clusters of pure white flowers at this time of the year, with soft fragrance that I have seen described as being reminiscent of baby powder. It is certainly one of the few semi-deciduous shrubs that has retained its popularity over the years, and is perhaps among the top two or three scented shrubs grown in New Zealand.
It is a hybrid raised in Britain, between V. utile and V. carlesii. The former is an rare species in New Zealand, and I have never seen it offered. V. carlesii is usually findable and is a very fine deciduous shrub, growing about two metres high, although the specimen in the park was only just over half that. It was covered with the most delightful pink-budded flowers, opening to white, and scented even better than V. x burkwoodii in my opinion. It is hardy and, surprisingly, does well near the sea, but has never achieved the popularity of its child.
Posted by Unknown at 9:27 AM