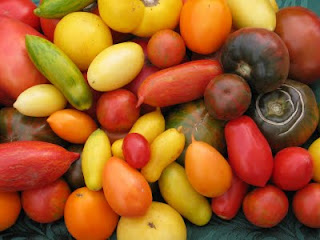 This weekend is garden weekend, Labour Weekend, the traditional time to get all sorts of summer vegetables into the garden. Whether that is a good idea this year is an open question – are the southerly blasts we seem to be getting every week going to stop now, or are we going to have a continuation of cold nights?
I cannot pretend to know the answer, but I think I will be hedging my bets, and waiting a week or two before I plant my tomatoes out, and probably a little more than that before thinking of peppers, zucchinis and squashes.
Having said that I have already paid a visit to my local garden centre, looking over the wide range of varieties available, and choosing a few varieties for this year. I have them potted up and sitting on the bench in the glasshouse, allowing them to grow on a little bit before I plant them out.
I met a friend in the tomato section at the nursery and we discussed the various types on display. There was a huge variety, over twenty modern types for example. We agreed that we would both be growing some Sweet 100, well known for their abundance of small sweet fruit. We both pretended that we were growing for the children (or grandchildren) but we also admitted that we mainly grew them for ourselves, and that only about 40% of the fruit even got into the house. If you are first time growers of tomatoes, this is definitely one you should have in your mix.
My friend’s taste runs to much more exotic varieties than the aforementioned, and he will also be able to find an incredible range of heirloom varieties about at this time of the year. I was talking to a nurseryman friend about the popularity of these varieties the other day, and he said that many first-time gardeners, as well as more experienced ones, are excited about growing these different types. He said they are usually a bit slower to come into cropping, but they do fruit well later in the season, and certainly give a great opportunity for some adventurous salads.
Posted by Unknown at 6:02 PM