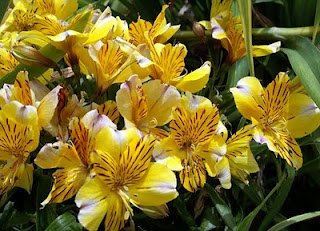 A bit of a break over Christmas and the New Year saw me wandering the streets, taking my early morning constitutional, peeking over the tops of fences as always, seeing what is happening in other people’s gardens.

One thing that stood out was the number of gardens with a mix of old and new Peruvians splashed around the garden - Peruvian lilies that is. These are Alstroemerias, named after the Swedish botanist Baron Klas von Alstroemer who collected seeds on a trip to Spain in 1753. They were from plants collected by Spanish explorers in South America, and must have excited him with their bright, almost gaudy, flowers, and their very tough perennial nature.

My first experience with these flamboyant lilies was in my grandparents’ garden, where plants threaded their way through some of the abandoned beds. These large island beds, once home to big collections of perennials, had been allowed to revert to shrubberies, but various very hardy perennials remained. The ones I remember best were orange to gold Alstroemeria, as they had colonised the beds and gave a bright display each Christmas.

There are about fifty species of Alstroemeria in South America, in two broad groups – a summer growing cluster of species from Brazil, and a winter growing group based around eastern Brazil. My grandparents’ flowers would have been forms of the Chilean species, A. aurantiaca which has bright yellow flowers, usually spotted with maroon. It grows very readily in any free draining soil – perhaps too readily actually, as it becomes overcrowded quite quickly, and then sets out for pastures new. It is not a great problem to control, but it can be a bit of a pain.

I also remember the intriguing species, A. pulchella (also called A. psittacina) which has a similar growth habit to the foregoing, but also has the most intriguing narrow trumpet shaped flowers, in green and red. It looks very entrancing, but this is far too energetic for anything other than very hard conditions. Given a free run, this will – well, run freely.

I had quite a battle with this for a couple of years in a free draining, elevated garden, but did eventually get it under control. This weekend I noticed it in a town garden, growing in quite dense shade under some trees, where it had wandered a little but did seem to be largely under control.

These species, and hybrids derived from them, were very popular cut flowers. I remember my grandmother filling vases with these bright lily-like gems. They lasted well in water and brightened up the house considerably.

For commercial growers they were not a great crop as they had a restricted flowering season, until the 1980s, when a group of America plant breeders decided to take matters in hand, and crossed the winter flowering types with the summer flowering forms, and succeeded in establishing a totally new type of Alstroemeria which was more or less evergreen, and which flowered for long periods each year.

Further breeders saw the potential for using these plants in the garden and in the potted plant trade, and concentrated on reducing the stature of the plants and removing the aggressive spreading trait. The first of these new varieties started appearing perhaps fifteen years ago, with willowy growth and smallish flowers. Work has continued and now there is a great range of smaller growing plants with stocky growth habits and relatively large flowers. I have some clumps that are ten years old and only about a metre across. I cannot imagine a summer garden without a display of these South American beauties.