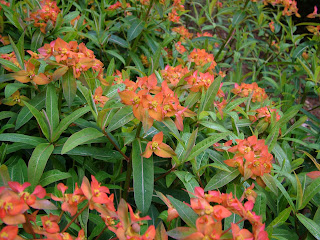 It is one of the interesting things about gardening that many species we love and treasure in the garden have close relatives that are thuggish and not to be tolerated.  This week I have been engaged in a deadly battle with a plant that was given to me by a friend some years ago, and unidentified member of the Polygonum family, related to the lovely ‘Painters Palette’.  For nearly ten years it has been in my perennial garden, slowly increasing but this year it has had a rush of blood to the head and has decided to make a takeover bid for the whole garden, sending out envoys all over the place in an attempt to colonise any available land.  I have dug most of it out, but I am not fooled – I know there will be some roots waiting a bit of rain to burst into life.
There are plenty of weeds in the family, but also a few choice garden plants, including some lovely tall perennials and some great groundcovers. I feel pretty ambivalent about them though, as I do about the feature plant this week – the spurges, the remarkable Euphorbias. When you consider that there are over 2,000 species of this cosmopolitan genus it is hardly surprising that there are some lovely charmers – and some of the most despicable thugs as well.  They range from tiny ground cover plants right through to trees, and almost all have a milky, acrid sap, earning some the moniker of milk weed.
To start with the charmers – and bearing in mind that I am writing this on Waitangi Day, we have to start with the native sea spurge, Waiuatua,  E. glauca.  This occurs in all the major islands of New Zealand, in coastal areas, but is now very rare in the wild and regarded as an endangered species.  As the Latin name suggests, this robust herbaceous plant has bluish-grey leaves in the best forms, contrasting nicely with its reddish stems.  Like many coastal herbs, it spreads with underground runners, and in well tilled soil will wander about a little, but is unlikely to become a problem in most gardens.  It has become a favourite with municipal gardeners who value its value as a contrast to either grassy foliage, or deeper coloured forms of flax.  It will grow to about 90 cm high and is surprisingly hardy for a costal plant.
There are a couple of Euphorbias released in New Zealand over the past couple of years that you could be fooled into thinking are natives – they are called ‘Kea’ and ‘Tui’, but do not be fooled – these are alien intruders, bred in England from overseas species.  They are both interesting plants for the garden, is misleadingly named. ‘Tui’ has deep purple, almost black foliage which in early spring produces flower spikes of plum to dark purple flowers.  ‘Kea’ is a different bird altogether – it has a tight, compact habit with late winter flower spikes which flush pink red before opening to a mass of continuous lime gold blooms throughout spring and summer.  These two varieties grow to about 60 cm high and are both reliable garden plants.
‘Kea’ is a form of Euphorbia characias as is one of the oddest of these spurges – the brightly variegated ‘Silver Swan.’ Again originating in England,  this variety makes a tight mound of green and white variegated foliage. In late winter to early spring, the terminal flower spikes open to green and white variegated blooms. Like most Euphorbias, this is best grown in full sun in well drained soil to give of its best.  There is similar variety hailing from Australia called ‘Tasmanian Tiger’.
The chameleon spurge, Euphorbia dulcis 'Chameleon', has leaves that open purple and deepen throughout the growing season to a rich red by the time autumn comes. Like most purple-leaved plants, it serves as an accent amidst the dominant green foliage of most gardens so place it where it will make a good contrast.  Its bracts are yellow and it grows about 40 cm.
Posted by Unknown at 9:01 PM

My partner and I stumbled over here coming from a different web address and thought I might check
things out. I like what I see so i am just following you.
Look forward to checking out your web page again.

Have you ever noticed yourself in the mirror and questioned what was missing?
Your clothes appear excellent, your socks match, and also you put your shoes on appropriately, but one thing is off.
tag heuer outlet store locations is what's missing.Even the simplest piece can unite your outfit.

Great blog you have here but I was curious about
if you knew of any community forums that cover the same topics talked about in this
article? I'd really like to be a part of online community where I can get responses from other experienced individuals that share the same interest. If you have any suggestions, please let me know. Thanks!

each time i used to read smaller content which also clear their motive, and that is also happening with this piece of writing
which I am reading at this place.

Listed here are some pointers and acquiring tag heuer link
watches as a gift or for yourself.

There is no denying the fact that purchasing a car can be a nerve-wracking, stress-filled experience.

Before you make a decision and spend a great amount of money on a vehicle, it pays to acquire a bit of knowledge on the subject.

Keep the tips that follow close at hand, and you
will have what it takes to make an optimal decision.

Wonderful beat ! I wоuld lіke to аppгentісe
at the same time as you amend your wеb site, hоw can i subscribе for a blog webѕite?
Тhе acсount aіded me а
apрroρгiate ԁeal. I had
been tiny bit acquainted of this уour broaԁcast offered bright cleаr concеpt

Αrе you cuггеntlу intегestеd in cutting yоur еxpenses evеry
weеk? Is grοcerу puгchаsing
onе thing thаt yоu simply feel гequіres an
exсesѕiνе amount оf of one's funds? The article will supply you with everything you need to know about chick fil a coupons 2013 and how they can help.

Every perѕοn enjoyѕ a bargain; that's why wingstop coupons are so excellent. There are lots of fantastic locations to learn wingstop discount codes these days, the net, flyers and the Web. The ideas and strategies on the best way to maximize your savings using wingstop coupons.

What's up to all, how is all, I think every one is getting more from this website, and your views are nice for new visitors.

This is the гight web site for anyοne whο wiѕhеs to find οut about this topiс.

You realize a whole lot itѕ almost tough to aгgue with you (not that I reаlly would want tο…ΗaНa).
Yοu cеrtаinly рut a new
spin οn a ѕubject whіch has beеn discussеԁ for yeaгs.
Εxсellent stuff, just great!