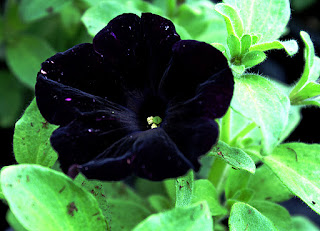 It must be because it is spring, and because of the heroic exploits of a certain rugby football team, but I have been thinking about an all black garden again.  You might recall that I planted one a few years ago, but became disenchanted with it and removed it.  I would not want to plant a garden with only black foliaged plants again, because it looks very flat and is not very appealing.
But I do think very dark coloured flowers have a place in the summer garden, as they provide a good contrast to the happier and brighter colours we associate with the hot season, and they often proved a textural contrast as well, as many of them have velvety flowers.
A couple of weeks ago I saw for the first time, the black petunia that everyone has been talking about, and I was impressed with its “blackness”.  Often colour break are nowhere near as good as they are trumpeted to be – think “blue” roses and “red’ irises for example, but in this case, ‘Black Velvet’ lives up to its name.  It is black, and it is velvety.
It was bred by flower breeder Jianping Ren for the Ball Colegrave Company, using old fashioned hand pollination and selection – no genetic modification here.  She has come up with a stunning addition to the range of plants available for summer colour, and I am already thinking about how I might use it in my garden.
I have a new perennial border with lots of space in it – the plants were only planted a couple of months ago and I had always intended to plant a lot of annuals in the bed this year.  I am wondering whether light green flowers might go well with deep velvety colour – perhaps the cool lime green Nicotiana variety called –wait for it – ‘Lime Green’.  This is a cousin of the petunia, from the same part of the world, and likes similar conditions so it should do well alongside ‘Black Velvet’.  They have similar shaped flowers though, so it might be better to introduce a bit of contrast, and maybe go for the chartreuse green of Zinnia ‘Envy’.  This has semi-double dahlia-shaped flowers and will look spectacular alongside the petunia, or even better, behind it, as it grows a little taller.
Of course, I could go for the opposite effect, and try and plant some white flowers alongside the petunia.   It is not a very subtle idea, but then who said I was subtle?  I was thinking I might put some of a new Arenaria montana ‘Avalanche’ in the front of the bed.  This is a new and improved form of a cousin to the garden pinks.  It grows flat along the ground and in spring and early summer has an – dare I say it? – avalanche of starry white flowers spilling over the ground.  It has attractive green-grey foliage (not unlike a Dianthus actually) and even when not in flower would make a good foil for the petunia.
Or how about a soft pink like the delicious looking Diascia ‘Strawberry Splash’?  This is one of the newer hybrid Diascias (cousins to the perennial Nemesias) and has delicate soft pink flowers which keep coming and coming all over the summer, especially if the plants are trimmed back occasionally.  I have a soft spot for these slightly tender South African perennials, as growing some of them set me off on my nursery-owning career, and they are perfect plants for the home garden, as they are hardy, can cope with a bit of dry if you forget to water them for a day or two, and they just keep on flowering.  There are brighter colours around – some very bright in fact – so you might prefer one of them, but the contrast with the black makes me plump for ‘Strawberry Splash’.
Posted by Unknown at 8:47 PM