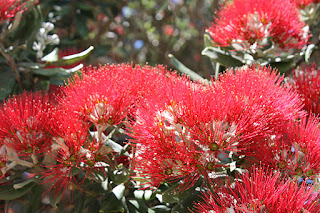 As well as being the season of goodwill to all men (and to all women, children and small furry pets) this is also the time for decorating Christmas trees, and for hunting out logical alternative “Christmas trees for our seasonally challenged Christmas.
The traditional tree is an evergreen, usually a conifer of some kind.  In New Zealand that has generally been the ubiquitous Pinus radiata, usually harvested from a low hanging branch or flogged from the side of a desolate country road.  In the northern hemisphere it is more likely to be a spruce or a fir tree, both of which grow more tightly than our pines.
Of course, the point of the evergreen tree for the northerners was to celebrate the potential return of the new growing season.  In the depths of winter there were few trees that remained clothed with foliage, and plants that did were given extra value – the holly and the ivy being two obvious examples.
In southern climes we have adapted to decorate our own native trees.  Most Kiwis will be very familiar with the idea of using a pohutukawa for their Christmas tree, but for most of us in Wairarapa that is impractical.
I say most of us, because in some favoured sites in our district it is possible to grow and flower a pohutukawa, and not just at the coast either.  Obviously they do best near the sea, and many of our beach settlements feature pohutukawa that flower for the summer holidays. There are some nice trees in sheltered places in Lansdowne too – one of my favourites is near the top of Titoki Street – but for most of us in frost prone areas pohutukawas are probably on the wish list.
There are some strategies to have a living native Christmas tree that might work though.  Firstly, pohutukawa love being kept dry and will grow well in straightened circumstances (see the cracks they grow in when in the wild) so they will do well in pots.  That will not work with seed raised plants as they take a long time to mature, but cutting grown forms should be perfectly able to cope with being container grown, and some forms at least should flower.
The best known is probably ‘Tahiti’, the Pacific Island relative of our native tree, with silvery foliage and orangey red flowers that flourishes in a warm spot on the patio and will relish being grown in a pot.  It is smaller growing than the New Zealand forms, but if you want to try an indigenous one you could try some of the cutting grown native types such as ‘Fire Mountain’ and ‘Parnell’, both red flowered, and ‘Pink Lady’.  If you like softer colours go for ‘Moon Maiden’, which has soft yellow flowers.
‘Mistral’ should be slightly hardier as it is a hybrid between a pohutukawa and its close cousin the rata and is slightly hardier when established but still needs cosseting until it has grown up through the frost zone in our climate.
The Australians have their own native Christmas tree, the New South Wales native Ceratopetalum gummiferum, so called because of its wonderful display at this time of the year.  Oddly enough, it is not a floral display in the strict sense of the word, as the flowers are borne earlier in the season, usually a couple of months before, and they are white.  After the flowers have matured the bracts surrounding the flowers start to colour, deepening from soft pink through salmon until they end up bright red at this time and a little later.
This small tree is slightly tender in our climate but it makes a wonderful specimen tree, as is evidenced by the mature specimen in Essex Street.  I try to make a point of getting around to seeing it each summer as it is so attractive.
I have read that there is a form for sale in Australia with white bracts, called ‘White Christmas’ of course, but I have not seen it in New Zealand.
Posted by Unknown at 4:31 PM