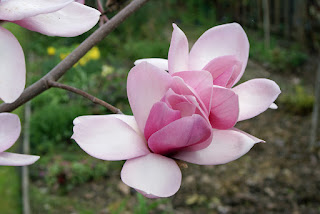 This little gardening story starts out in the living room of a motel in Dunedin on Sunday morning, where the Head Gardener and I were talking with our son and his partner about the difficulty of writing – theses in their instances, garden articles in my case.  Ana (the partner) asked if I had taken any photographs while in Dunedin that I could use for a story, and I said I had, but none for this week.
She then asked me what I was going to write about, and I had to confess that I had not really decided on anything – it had been a very hectic week, and I knew we were flying home later in the morning so I thought I would think about it on the way home.
As it turned out the flight offered no inspiration, and even a little gardening in our other son’s garden in Wellington did not give me any great ideas, although it might provide inspiration for a story soon.
As I drove home I was wracking my brains trying to think of something, without great success.  The weekend had been tiring, with celebratory meals and late nights, and my mind was not working very well.
But when I drove up our drive I caught a glimpse of the beautiful pink Magnolia ‘Sweetheart’ in flower down the back of the section, and I stopped the car, opened the boot, got my camera out and raced down to have a close look at it.
I planted this some years ago, but it was underneath the shade of a large lemonwood tree and it took an interesting growth path, one stem heading due north while the others clustered around the crown.  The removal of the lemonwood a few years ago has made all the difference.  It has enabled the smaller branches to grow out, and the whole tree, although rather lopsided still, now looks very Japanese.   And the flowers – well, if there is a prettier variety I have not seen it.   ‘Sweetheart’ has deep pink flowers, upright facing, with lusciously creamy interiors, the blooms being carried with abandon in early spring.  It is a New Zealand raised seedling of the popular British variety ‘Caerhays Belle’, and like most deciduous Magnolias, it requires a sunny spot with well-drained soil with plenty of humus.  It will need watering when fist planted, and in sustained dry spells, but once established is very hardy.
The pink Magnolia that many lust after is the wonderful M. campbellii, from the Himalayas.  When well-frown in a perfect spot, and in a season where we do not have any pesky frosts interrupting the flowering season, these are spectacular trees – there is one in the Palmerston North Esplanade gardens that I try to catch each year – but they can be a bit tricky in our colder inland climate.  They are also reluctant to flower early in their lives - it can take years before they bloom, so it probably pays to grow a more recent hybrid.
Posted by Unknown at 10:33 PM