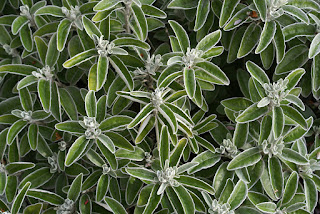 This week the spotlight has (literally) been on Castlepoint as the beachside community, and its many friends, has celebrated the centenary of the switching on of the iconic lighthouse that graces its reef.  The lighthouse was showing its true colours at times over the weekend, but at other times was lit with a variety of bright lights, surely making it a shipping hazard, as sailors, drawn by the display,  could have been lured siren-like onto the rocks.
Castlepoint is a wonderful place for a variety of social reasons, but for gardeners and lovers of native plants and wildlife, there are others reasons to venture out eastwards, as the reef and the remarkable castellated hill that Captain Cook called Castle Rock are home to some interesting and garden-worthy plants.
Prime among these is the Castlepoint groundsel, Brachyglottis compacta.  There are many species of Brachyglottis in New Zealand, among them a cluster of yellow flowering evergreen shrubs of coastal habits, but there are also inland, and even mountain species, the best known of which is the rangiora, B. repanda.
Castlepoint’s daisy  is a bushy, evergreen flowering shrub of low growing habits –  about a metre or so – and the only place it is found in the world is on the limestone cliffs at the beach.  It has oval shaped leaves about 2–4 cm long which are green above and white below, with slightly toothed edges. The flowers are yellow and appear in summer.
As you would expect this is a brilliant plant for dry places, and will flourish through the worst Wairarapa droughts in hot sunny places, its golden flowers following by wispy white seedheads.
Wairarapa is also home to the similar, but subtly  different, B. greyii, which is found in coastal areas to the south, from about Flat Point around to the mouth of the Orongorongo river.   It has slightly greyer leaves, but retains the silvery down on the underside, and gives a greyer appearance that the Castlepoint species.  It has an even better display of golden flowers making this particular species popular overseas.  This is another great shrub that does very well in hot sun, coping well with poor soils.  We have struggled a bit this with plant as it is planted in rubbish soil, a piece of land previous owners filled with road scrapings.  The soil is very heavy and wet in winter, and these plants are not keen on those conditions.
As you might expect, these species have been crossed, and they are the parents of a number of interesting hybrids including the very popular Brachyglottis ‘Sunshine’, which is another very hardy form with grey leaves and a super abundance of yellow flowers.  Overseas there is a variegated form of this plant but it is hard to see how it could be an improvement.  ‘Otari Cloud’ is a similar hybrid, and has heaps of bright golden flowers over grey foliage.
I suspect these plants have become very muddled in the horticulture trade and buying any one of them might mean you end up with one of the others!
There is one form that is quite different – Brachyglottis ‘Leith Gold’ is a Dunedin-raised form with a mix of the attributes of its parents, having  large leaves that are similar in size to rangiora but  having the colour and texture of B.greyii. This interesting plant has a fairly open habit, again halfway between its parents, and it carries panicles of small yellow flowers, intermediate in size between the tiny flowers of rangiora, and the larger flowers of the Wairarapa species.   To get the biggest leaves it is necessary to grow this in some shade, but it will cope with full sun otherwise.
Posted by Unknown at 8:23 PM