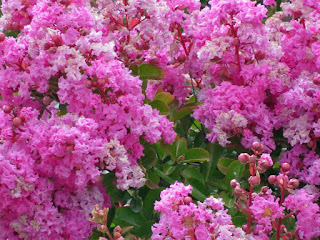 The long summer has continued unabated, despite the Metservice confidently predicting we will have southerlies and showers at least once a week.  You will have no doubt noticed that these are dry southerlies, with a bit of heat relief and even some cloudy periods, but they have been marked by a complete lack of moisture.
I had to tell the Head Gardener to keep a look out for me at the weekend when I mowed the lawns – well, the bits near the edge of the borders that end up getting accidentally watered.  The front lawn has developed such large crevasses I thought I might get lost down one of them and need rescuing!
The hot weather and relentless lack of moisture have suited some shrubs though, and even though some garden plants are literally shrivelling up this summer, there are a few that have been seen at their best this year.
Probably the best performing among these is a plant that is seen surprisingly little in Wairarapa gardens, as it can provide one of the brightest and most floriferous displays in the middle of a sustained warm spell.  I am talking about Lagerstroemeria indica, the Crepe Myrtle, a small growing deciduous tree from Korea and Japan, with many relatives in the warmer parts of the world, including Australia.
In the wild this is a small growing tree that distinguishes itself by amazing displays of crinkled flowers that have earned it the ‘crepe’ part of its name.  These flowers are borne from summer into the autumn and at their best they can smother the whole tree giving a very dramatic effect.
The type species, and the one that is most commonly seen, has lots of lilac-pink flowers, but in over 200 years of cultivation, a wide range of hybrids have been raised.   Overseas this shrub has become a very popular potted plant and dwarf varieties have been released, some of which are now available in New Zealand.  They make fabulous plants for the patio as they can cope with a little bit of benign neglect.
‘Flamingo’ has flowers that, despite the suggestion in the name that they might be pink, are in fact a deep red, while ‘Soire D’Ete’ is a lovely soft pink.  Funnily enough, ‘Petite Snow’ is a dwarf white form, but I don’t think it works as well as the brighter coloured varieties.
These plants are not too fussy to grow in our climate, but they do not like being in the shade, and they do best in well-drained soil as well.  Their ideal spot would be in the full sun in a relatively warm position, where they should flourish and provide lots of summer colour for many years.
I guess that they have not become more popular because people think they are a little tender – and they certainly do look as though they are slightly tropical but they will cope with any frosts that the Wairarapa winter will throw at them.
The other reason they are not commonly planted is, I am sure, the current prejudice against deciduous plants.  The compensation with so many shrubs and trees that lose their leaves in fall is that they often have pretty autumn colour – and this species does – or they have attractive bark – and this does that too!