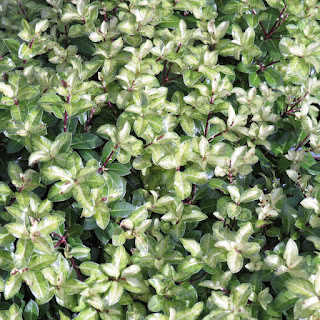 Sometimes my two jobs interconnect in interesting ways, and this week gave a great example.  A local landscaper came in to see whether I could tell him about the sort of plants that were in use in the 1920s, as a client wants to re-establish an authentic garden around a beautiful workingman’s cottage from that era.
Interestingly, his client wants to use camellias, natives and evergreen Magnolias to supplement to laurel hedge which has already been planted.  Luckily, we have an old Robinsons catalogue from the 1920s at work, and I was able to show him that the wonderful Magnolia grandiflora¸ with its large bay-like leaves and bowl-shaped scented flowers was a favourite in the 1920s, and that there were a few old Camellia varieties around too, although there were none in the catalogue that were commonly grown now.
It was in the native tree and shrubs area that things have changed the most, with the 1920s catalogue being very sparse on varieties that we would think of as commonplace.  There were no Hebes or Coprosmas, and even very few Pittosporums.
This was a little surprising as Laurie Robinson became well-known a little later on as one of the most ardent garden fans of native ornamentals,  and as the introducer of quite a number of variegated forms of some of the shrubby Pittosporum species, especially tarata or lemonwood,  P. eugenioides  and silver matipo P. tenuifolium.
Robinson’s nursery, no longer in family ownership, continues to grow new forms of these popular native shrubs, and in the past year or so has released two new dwarf forms of P. tenuifolium. Over the past few years a number of different dwarf forms have been released in New Zealand, including a lovely silvery/green leaved form from Clareville Nursery called ‘Elfin’, which we have in the front garden.  They all share a naturally compact growing habit, with the ability to be clipped to be kept under control.
Perhaps the best known of these is ‘Golf Ball’, a fast-growing dwarf shrub that can easily be kept to about 30 cm high with a similar width.  These are quite often used as a replacement for  box hedging, having a lighter look while being just as easily kept under control.  A few years ago the nursery industry was promoting the use of some Hebe varieties for formal hedges, but this makes a much better choice.
Recently two new coloured forms have become available from Robinsons, and a few other selected nurseries – a golden form and a silver one, called, you will not be surprised to read, ‘Golden Ball’ and ‘Silver Ball’. As you would expect, these varieties have bright glossy foliage, and form naturally rounded shapes, with foliage of golden and silver hues respectively.
I have been intrigued by another relatively new selection, a semi-dwarf form called ‘Reflections’.  This selection I immediately noticed in the nursery stocks as it has a very tidy form with clean high gloss foliage and striking colour. The small leaves are green with a curiously wavy edge, coloured yellow on the central rib and veins.  As if that was not enough, the stems are red and the new growth is right creamy-yellow.  This makes a nice com pact growth, perhaps a little more vigorous than the truly dwarf forms, but also much more compact that the willowy larger forms.
Like all Pittosporums, you need to be a little bit careful about insect infestation, especially the pesky little native psyllid which can pucker the leaves of left unchecked.  A quick spray with an insecticide will soon sort the problem out.