All the way from Chile, with bells on ... 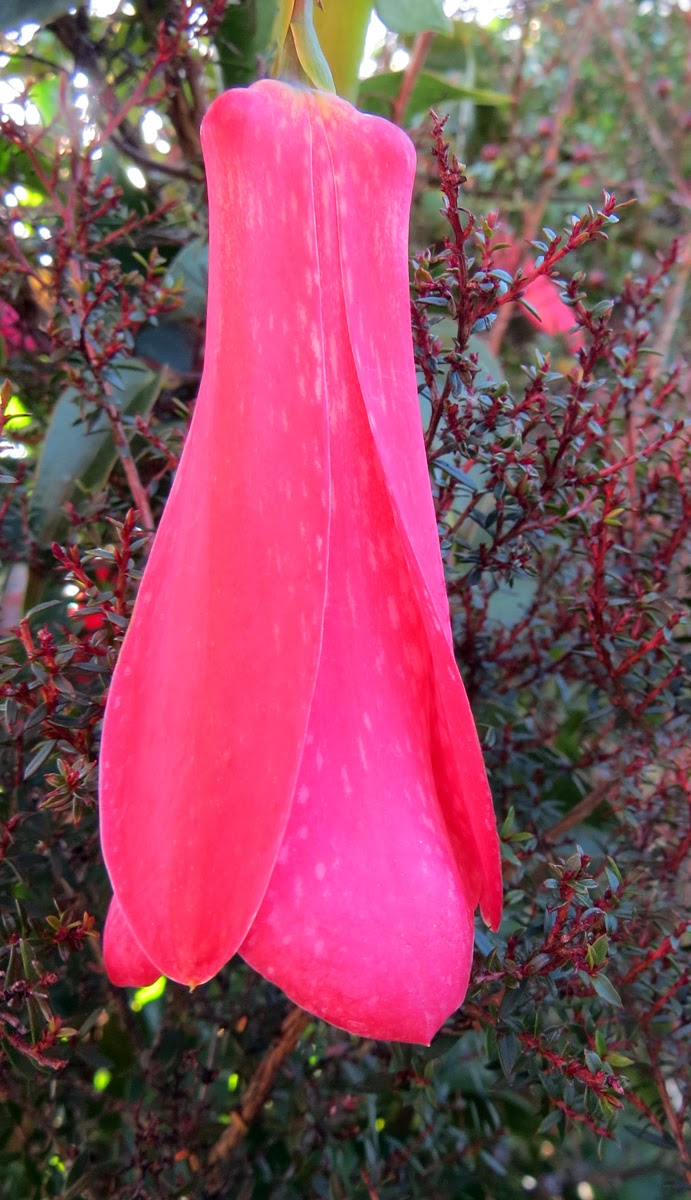 Lapageria flowering in the manuka

Last week we were discussing gardening at work and the question came up about the best place to grow a Chilean Bell Flower climber, Lapageria rosea. It is an interesting question because ithe placement of this stunning plant does require careful consideration.
Like many plants from Chile it is slightly frost tender, and if left outside on a normal fence it would soon succumb to our winters. But on the other hand, again like many of its Chilean kith and kin, it prefers a cool root run, so is not really all that suited to a northerly aspect.
I have two plants growing intertwined – a white form and the more usual pink one – and they are happily growing up against the wall of our sleepout, on a south wall, along with some Chatham Island Forget-me-nots.  I added lots of compost and sand to the soil, so it is well drained but also has a high level of humus.
The plants grow to the roofline each year, and each winter the frost nips them back a little.  Over the past few years they have also send some trailing branches out into the adjoining manuka and dwarf Camellia trees, but that is fine as their flowering seasons do not overlap, and it is a nice bonus to have the beautiful bells hanging from a slightly lower height.
I cannot think of a relatively easily grown climber that is as rewarding as the Chilean Bell Flower.  Mine has had intermittent flowers for the past couple of months and is now approaching the height of its season.  The white variety has flowers tinged with pink as it opens, but once fully extended has the most pristine of flowers.  The pink or rose forms, on the other hand, have waxy flowers of varying shades of pink, usually with white mottling on the inside, sometimes visible from the outside.
In the wild of Chile these plants were once harvested for their fruit, but they are now protected and are the national flower.  In the garden they are relatively easily grown, but they are difficult to propagate.  I have found the only reliable way is to grow them from seed, but it is a slow business.  They are not self-fertile, so two different clones are needed, and even then seed set is not reliable.  Once the seed is set it forms a small sausage like pod.  The seed should be sown as soon as it is ripe, as it germinates a lot better fresh than it does if it has been stored for a long time.  It takes a few years before the new plants flower.
If you have a cool spot on a south facing wall and want a special climber, you would do no better than get one of these from the garden centre.  Treat it carefully for the first year or so – slugs and snails love the fresh shoots in the spring and can quickly make a big mess of a small plant.