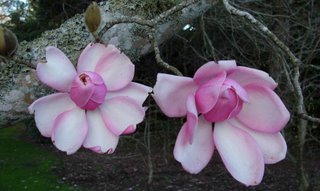 It is remarkable what a few fine days will do – and not just to the garden, although at this time of the year it is certainly most welcome – but also to the gardener. Even the most resilient horticulturist feels a little downhearted at this time of the year. The lack of sunlight and the dearth of flowering plants at the end of winter can be very trying. So, on Saturday, I bundled the Head Gardener into the car and we took of on a mission – to see the Magnolia campbellii in the Esplanade Gardens at Palmerston North.
I grow a number of Magnolias here in the garden, but M. campbellii is not one of them, so I delight in other people’s trees. I used detour on our nursery run in Upper Hutt to see an advanced specimen in a private garden, and then would find another large tree near one of our customers in Lower Hutt.
This weekend’s journey proved to be well worthwhile for a number of reasons – some pleasant, and other decidedly unpleasant.
Our timing was perfect for the Magnolia. The tree, which is visible from the main road into Palmerston North from the south, was just at its peak, and the recent poor weather had not affected the flowers too badly at all. As always it was stunning sight.
I think most Magnolia lovers would agree that this is the very epitome of style and is surely the best species of all. It has the most wonderful pink flowers, without the hint of purple that many species and hybrids have. It is a large tree when fully grown – up to 30 meters in fact – and is terribly slow to start flowering – it can take at least ten years from planting before the first blooming – and it is very prone to frosts – in cold areas you’ll only get a good flowering one year in four perhaps – but having said all that, it is still the best to my mind.
I don’t have the space or the patience for this species, so I make a pilgrimage each year, to one of my favourite trees to pay my homage – and hopefully get some nice pictures. Once we had got some pictures we went for a wander through the rest of the garden.
We were near the hot house when HG turned to me with a quizzical look on her face.
“Can you smell that horrible pong?” she asked.
“Oh yes,” I replied. “What do you think it is?”
She thought that it was coming from the muddy grass we were walking over, but I was not so sure. The smell was more reminiscent of three-week-old socks rather than soggy grass.
Then I saw a Chinese couple, bent over double underneath the bare branches of a large Ginkgo tree.
I am very fond of these particular trees, and love the sight of them when I visit the rose trial gardens in the summer, when they are green and stately. I love them even more in autumn, when they have turned deep golden yellow.
But I wasn’t aware that one of these trees was a female.
These ancient trees – known from the fossil record as being at least 270 million years old – are easily grown, and make spectacular trees for the large garden, with their attractive maidenhair fern-like foliage. The female forms, though, if pollinated by near-by males, produce a large crop of plum-sized fruit. These fruit contain a highly prized nut, highly; prized both for culinary and medicinal purposes, but the flesh is absolutely foul-smelling – and it was this flesh we could smell.
When the fruit-gatherers had finished we went under the trees and picked up a fruit for ourselves, removing the flesh. We carefully washed the nut, and our hands, which also ponged, in a washbasin, and I popped it in my camera bag.
When we got home, refreshed and thrilled with our little outing, I put the Ginkgo nut on the table, and went out to check the glasshouse. By the time I got back the whole kitchen smelt of old socks. I checked my feet – which were fine – so the nut ended up on the fire – thankfully not an open fire.
Posted by Archivist at 9:05 AM