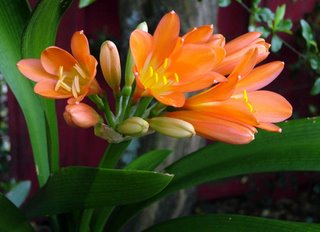 Sometimes in the garden, as in life, it is not the huge things that bring the most satisfaction. In the garden it might be the first flowering of a special plant, or the successful cultivation of a difficult plant. So this week the Head Gardener is one very happy gardener – her Clivia has flowered.
For those in more northern climes this would be no great deal. In warmer areas Clivia present no special difficulties, but in our frost-prone garden it has been an interesting challenge to get one of these South African beauties into flower.
We first planted two large containers with Clivia bulbs about five years ago. The HG is very fond of their elegant beauty and, although I am not a huge fan myself, I do think they are useful and attractive flowers for cool and shady areas.
We planted our plants very carefully, in relatively deep shade underneath a couple of small evergreen trees. Despite the deep shade the occasional frost still manages to sneak in and damage the other frost tender plants that we grow there. Each year the Plumbago manages to make it through until about August before being fried, and the yellow Lantana (also in a container) get similarly blitzed each year. The Clivias usually get their share of damage, and each year the leaves are badly scorched, but this year, perhaps because the winter has been milder, the leaves came into spring virtually untouched, and one on plant a lovely head of flowers has appeared.
Most garden Clivias are bred from the orange species C. miniata. This species has been grown and bred around the world for nearly one hundred years. Until recently the vast majority of the forms available in the trade have been seed-raised orange forms for the garden, with a concentration on large flowers. However, that has not always been the case overseas.
The Clivia is a very popular plant in Japan. In that country, though, the emphasis has been on the raising of new varieties with variegated leaves, and hundreds of forms are known and registered.
In China it is the miniature forms that are most popular, especially when grown as houseplants. In Changchun, Masterton’s Chinese sister city, the plant is so popular that it has been adopted as the official flower of the city
In New Zealand we are lucky in that we can grow them outside (albeit with difficulty in colder areas) but there are some things to keep in mind - the Clivia has some quite specific needs. As explained above, the leaves are frost tender so it is important that the plant should be in a frost free spot. In many areas that means planting in deep shade but that suits these plants fine, as it replicates the conditions they grow under naturally. They perform best under evergreen trees with medium to deep shade, even in warmer areas. The most amazing display of Clivias I have ever seen in a garden was at ‘Ngamamaku’ at Oakura, where a deep, steep-sided gully has been planted out with hundreds of Clivias.
The soil type is relatively important too, as these bulbs prefer very well drained soils. They seem to need high oxygen levels to perform best and will not be happy in wet clay soils.
If you are a fan of these plants you will have noticed that there is an increasing range of plants available now – and they are slowly coming down in price too.
The first of the ‘other’ Clivias to make it out of the specialist societies were the yellow forms. When they first appeared they were hideously expensive and they weren’t the healthiest plants either, some being quite “miffy.”
New Zealand plant breeder Dr Keith Hammett decided that Clivias were worth his time and collected a huge number of forms, corresponding with overseas growers who were breeding new forms. The result of his work is now available in garden centres.
His pale yellow form, ‘Moon Glow’, is a broad leaved, strong growing variety with very wide petalled flowers. The plants are grow from seed so they are a little variable but the all feature hybrid vigour and are a worthwhile addition top any home garden.
Hammett has also turned his attention to the red varieties, also increasingly popular. It must be said that these flowers are not fire-engine red. Remember that they are coming from orange flowers and they will be closer to orange than red, but they are considerably deeper flowered than the old types. Hammett’s varieties are in the trade under the name of ‘Fire Glow.’
Hammett has also unreleased an orange strain called ‘Sunset Glow.’ These are similar to the yellow and red forms in that they have very wide flowers with good colouring, and they are very vigorous.
Tony Barnes at ‘Ngamamaku’ has also been breeding Clivias and had a wonderful range of hybrids for sale at the garden. I visited during the crossing season a couple of years ago and spent some time with Tony as he worked away at his crosses. I can easily see how someone would get excited about breeding these plants as these is a good range of material within the genome to play with. Over the next few years expect to see a great improvement in the form of these flowers, especially on the show bench.
If you are keen on growing any of these plants, it pays to seek out help from the New Zealand Clivia Club. They can be found on-line at http://www.nzclivia.org.nz. Through the website, you will be able to find other New Zealand suppliers of these wonderful plants.
Just do not tell the Head Gardener though. I reckon she’ll be keen to increase the range of Clivias growing around here.
Posted by Archivist at 1:12 PM