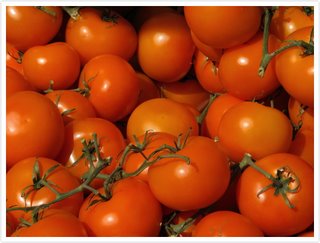 This weekend I did the second most popular thing for New Zealanders at Labour Weekend – spending time with family. Although, in this case, I spent a bit of time with someone else’s family - the Summers family, who were having a family re-union. Oddly enough, this family is connected to my wife’s family, as are the Springs, so you can imagine the hilarity at our family get togethers!
The first New Zealand ancestors of the Summers family were William and Louisa. William was a gardener at a number of large sheep and cattle stations in the Wairarapa in the 1890s, where his main job was the production of fruit and vegetables on a large scale. One vegetable that he probably wasn’t growing too many of is the vegetable (strictly speaking a fruit) that has been occupying the thoughts of many New Zealanders over the long weekend – the tomato.
The tomato comes from the highlands of South America and, although it has been grown in the West for many years, it has not been universally popular as a vegetable. For many years it was thought to be poisonous (as are many Solanaceous plants) and was not eaten at all. By the turn of last century it had become more popular although it was still not the staple diet item that it is today.
I have an old catalogue from a Lower Hutt seed firm, dating from 1903. I have just checked and there are 32 varieties of tomato on offer. Interestingly, there are also 32 different melons on offer – rock, water and pie.
Among those many tomato varieties there are few we would recognize today, although, no doubt “Marvel of the Market” was very much like the spherical red-fleshed fruit we favour today. There were purple, yellow and pink skinned types, pear shaped, and, in the case of “The Peach”, even some slightly furry ones. There was one called “Cherry”, according to the catalogue, mainly used for pickling, and “Red Currant,” just proving that some fashions do return.
I did not plant any tomatoes this weekend, as I believe they are best left for a week or two after Labour Weekend. It is a natural human instinct to tie activities with calendar events, but in this case the association does not work well for those of us who garden much south of the Bombay Hills, especially in inland areas. On the coast, you can plant at Labour Weekend, or earlier in fact, but inland it pays to wait awhile.
Before you plant out tomatoes it pays to have everything well prepared. The site selection is important, especially as regards sun. Tomatoes just love growing in full sun – in fact they’ll cope with about as much sun as they can get, in our climate at least.
It pays to add some fertilizer to the soil, and some compost, but be careful with the compost. Tomatoes are very susceptible to damage from hormone sprays and if you have composted anything from a sprayed lawn, you could be in trouble. I would not use any bought compost for tomatoes either, to be honest, as they are sometimes made from garden waste deposited at recycling centres. They are fine for most things, but keep them away from tomatoes, roses, beans and grapes.
Definitely dig in some fertilizer – whatever type you think best. I often use a slow release product, but frequent small applications of quick release will work well too, and you can adjust to a higher potash mix as the plants start to fruit.
The real key to growing tomatoes well is in the watering. The plants grow best with regular watering (compost will help hold the moisture) but is most important for the health of the fruits. Irregular watering, drying out and soaking, will lead to the dreaded blossom-end rot and to cracked fruit.
I think it is a good idea to add some water crystals to the soil before planting, as it will help buffer any dry periods.
Once the soil is prepared the stakes should be driven into the soil. I like to grow mine up strong wooden stakes but you could use a frame or a teepee perhaps. Whatever you use it is important to put the stakes in before the plant as it prevents damage to the roots.
Once the tomatoes are planted it’s a good idea to give them a deep watering – literally soak the soil and then leave the watering for a week or so. If you can do so, it helps to put some kind of mulch down. Remember not to use suspect compost though – perhaps some pea straw or mushroom compost would be good. As well as reducing the need for watering, the mulch will also suppress weeds.
The choice of variety is a very personal one. I like to plant some early varieties – I usually use Early Girl – as they will set fruit at a lower temperature. I also grow some medium sized varieties, as I prefer the stronger flavour of these types. Many of you will prefer to grow the Beefsteak types, with their fleshier fruits. Whichever you choose, it pays to spend a little more and buy an F1 hybrid. It will be sturdier, stronger and will fruit much better than the older open pollinated types.
At the opposite end of the modernity spectrum are the heirloom varieties – some of those old ones from the catalogues of a century ago, and oddball types from around the world. They will tend to fruit later and they will also not have such large crops, but many gardeners enjoy having the slightly eccentric varieties available – the purples, pinks, striped and green forms, in all shapes .
And who knows? They might even find one of the types that Bill Summers was growing, all those years ago, in those huge gardens, attached to the large sheep stations.
Posted by Archivist at 10:59 AM

You have a nice Blog, well written with great photos. I enjoyed it very much.
Joe T
Baytown, Texas