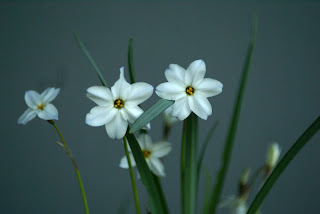 
I always think early spring is one of the most exciting times in the garden. It seems every day brings a new plant into flower, and although some of the aristocrats of the garden – the roses, rhododendrons and lilies – are a little way off flowering, there are still plenty of little horticultural treasures about.
I am more than a little partial to flowering bulbs, so it should come as no surprise to anyone that it is the little dainty flowers appearing at this time that get me excited.
Among the large golden daffodils that are flowering at the moment, one of my favourite bulbs is just starting to put on its show – the charming ‘Thalia’.
This is a very old hybrid of the delightful Narcissus triandrus , the Spanish species sometimes called ‘Angel’s Tears.’ Some say it earned its common name because the flowers, white in the best forms, hang down, suggesting sadness. Others say, more, prosaically, that the English plant hunter who found it, so upset his guide, named Angelo that he cried.
Either way, it is a lovely plant, and ‘Thalia’, nearly four hundred years old, is surely one of the loveliest of its hybrids with its pure white, pendulous flowers, with two or three flowers on each stem. It is fantastic in the garden, or in containers as I grow it, and it is great for picking for indoors.
Some books say this variety is nicely scented, but do not expect something like the fruity fragrance of ‘Erlicheer’ – this has a much more subtle scent. I suspect it comes mainly from the newly opened flowers, but I do have to say that mine do have a subtle scent.
That is hard to discern though, as mine are growing alongside a pot of white freesias – their scent just does not get a look in.
I grow a few different white freesias. I have the old fashioned one known as ‘Burtonii’, which is the type that most New Zealand gardeners were brought up with. It has a lovely cream throat and not a hint of the purple staining common on many others. I also have a semi-double form which I have never seen for sale but which is swapped among bulb lovers.
I also love some of the large modern hybrids, and grow them in pots. They are not as sweetly scented, and I know some gardeners think them a little gross, with flowers three of four times the old species, but they are charming and easily grown. They are frequently grown for the cut flower trade, and unsurprisingly, they make great cut flowers from the garden as well.
At the opposite end of the scented spectrum, are the bright little Ipheion uniflorum.
These are bright little starry flowered bulbs from South America, and they are scented. Actually, it is probably more accurate to say they smell, as they do not have a very attractive scent, unless you are keen on the fragrance of onions!
They are usually blue, and the first varieties I ever grew were the plain, light blue forms, but I also have a pot of a much lighter form. I am not sure of its name. ‘Alba’ has a greenish central vein, which this form lacks, so it is probably a seedling from ‘Alba.’
You might not want to plant either of these forms amongst your most precious rare bulbs, as they do increase rapidly, especially in light, warm soils, but they are great value as edging for borders.
Posted by Archivist at 8:23 PM