One of the delights of being the editor of the Society for Pacific Coast Native Iris (SPCNI) – in fact, maybe the only delight - is the sudden access I have had to the back issues.
I have had a very interesting week or two, trawling through the old copies, looking at the stories that have been running in the almanac for over thirty years.
Today I came across a story about the history of PCIs in Australia, written by the well-known bearded iris breeder, Barry Blyth.
In discussing the development of PCIs Downunder, he mentioned an early breeder had assured him he had created a race of irises using I. douglasiana, I. innominata and, amazingly, I. unguicularis.
This winter flowering species, often known by its old name of I. stylosa (sounds a lot nicer doesn’t it?) is a favourite of mine, and in various gardens I have grown the usual form, ‘Water Butt’, ‘Mary Barnard’, ‘Alba’, ‘Starker’s Pink’, I. lazica, and I. cretensis.
There would be a difficulty in crossing any of these with the PCIs, as they have normally finished flowering before the PCIs start, but this year one of my seedlings, 04054, is already in flower. This morning I opened one of its buds and crossed it with pollen from ‘Starkers Pink’. 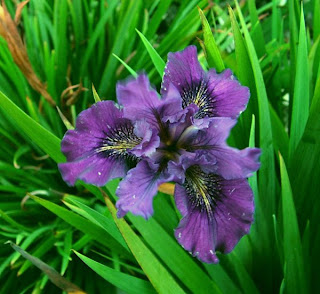 As far as I know, at least some of the Unguiculares section are 2n=40 , and as the PCIs share the chromosome count, it is theoretically possible that the cross might work. It will be interesting to see what happens - I'll keep you posted.
Posted by Archivist at 7:58 PM