Mid-November - can the frosts be over? 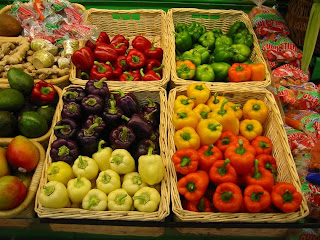 Now it is mid-November, and all risk of frost has passed, we can think seriously about finishing off the planting of the summer vegetable garden.
I cannot believe I wrote that sentence less the five days after we had snow, sleet and hail in the main street. But, seriously, if we do not plant now it will be getting too late to plant at all, especially for some of the warm weather plants that need a longer season.
I planted out the rest of my tomatoes this weekend, a punnet of ‘Sweet 100s’ I have been growing on in my glasshouse. They are planted up a bamboo tripod, in soil that has not grown tomatoes for about five years.
I also planted out some peppers. I know not everyone likes capsicums – in fact, some people have an avid dislike of them – but I think they are a very useful year-round vegetable, for salads in summer and stir-fries in winter.
Your local garden centre will have quite a range of them in stock now. Make sure you get an F1 hybrid variety, not the older open-pollinated ‘Californian Wonder’, as there is no comparison as far as performance goes. I was going to say that I do not know why nurseries continue to offer the old variety – but I do in fact know. The hybrid seed is much dearer, so it is much more profitable to produce the open pollinated strains like ‘Californian Wonder’, but they are so inferior I would not consider growing them at all in my garden. They will fruit later, they will fruit less, and the fruit will be a lot smaller.
There are quite a range of varieties around, including some interestingly coloured ones. Most of you will be familiar with the yellow varieties you see in the supermarket, but there are also orange, white and purple varieties. We grew a lot of these about fifteen years ago, as a trial for a local grower, and they all performed well, although some lost their colour when they were cooked – the purples, for example, went green, in much the same way purple beans do.
Capsicums are not hard to grow. They need fertile soil, well-drained, and they must have full sun – the warmer the spot the better, basically. They are members of the same family as potatoes and tomatoes, so should not be grown in soil where these have been grown recently. Feed them well, and keep picking the fruit as soon as they are mature enough as it will allow future fruit to develop.
This year I have resisted the temptation to try watermelons again. I have tried at least five times, and the biggest watermelon I have succeeded in growing was about the size of a golf ball. You absolutely must have very warm ground for these to get under way in the spring – in fact, in the southern half of the North Island I think you are probably best to grow then through black polythene to ensure they get a good enough start.
Rock melons are slightly easier to grow, not needling such a long growing season. I must confess they do not appeal to the same degree as watermelons and I have never grown plants to maturity.
Posted by Archivist at 8:29 AM