Watch out for Spaniards! 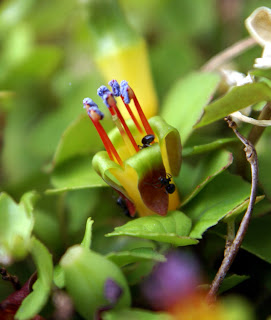 This weekend I had to face one of the worst gardening problems imaginable. A grass has invaded that garden over the past few years, brought in on the wings of the westerly winds from infestations further afield. It is not a terrible weed, in that it does not spread like convolvulus or cooch, but it does spread freely from seed and I like to keep it under control as much as I can. It is especially a nuisance among the Pacific Coast Irises because its leaves are similar enough to the iris leaves and they can be come quite well established before I notice them.
But this weekend I found a strong plant established in a far worse place – deep in the middle of a well established Spaniard – and I do not mean an inhabitant of Barcelona either.
The Spaniards (Wild Spaniards, Speargrasses) are familiar plants to trampers as they mainly inhabit the Alpine areas of New Zealand (the Spaniards I mean, although trampers do too!), where they lie in wait for the unsuspecting hiker. Brush a bare leg against one of these plants, or worse still, put your hand down onto the fiercely spiked leaves and you will soon see why they are given their common name – they are capable of inflicting serious pain. I have two of these brutes in the garden. After all I have said about them it sounds like pure bloody mindedness to do so, but they are wonderfully symmetric plants, looking most like a small Agave or Aloe, but with much finer foliage. The flower stems, which start out large asparagus spears, open with many thousands of small flowers.
It was in the middle of all this spikiness I saw a clump of grass. I got down on my hands and knees, and carefully – very carefully – worked my way into the crown of the plant where the grass had taken hold. I think I got it all out, but time will tell.
I do not wear gloves when doing such a job. In my years handling thousands of bare rooted roses I came to the conclusion that gloves just made me careless and meant I got spiked more often, so I got a few spikes in my fingers.
Spaniards are remarkably easy to grow in the most gardens, provided their need for good drainage is catered for. They are not fussy as to soil type, but as they have a deep taproot, they do prefer deep soil. They will grow in semi-shaded areas, but under those conditions will not produce the same intensity of foliage colour.
They are not the easiest plants to come by but specialist native nurseries will stock them, and some larger garden centres have a range. Both mine, A. squarrosa and A. aurea, I bought locally.
I spent some time up in the alpine zone myself this weekend, training for a longer tramp planned for later in summer. There is little out in the higher altitudes yet – just a few native buttercups – but lower down the mountain the native iris, Libertia grandiflora, was at its best. This is the best flowering of the native Libertias, its 60 cm high clumps of green leaves being topped with striking 3 cm wide white flowers on many branched stems.
In the wild, this plant grows in the forest margins – at the edge of clearings or along streamsides – and that is probably the ideal place for it in the garden too. It makes a wonderful statement in semi-shaded areas, and will make fabulous ground cover when bulked grown in such conditions.
The other species commonly grown in New Zealand is the similar L. ixioides. This is the spiky plant often seen in traffic islands or strip beds in municipal gardens, where its stoloniferous habits (it runs like cooch, but a lot less vigorously) and its bright yellow/orange colouring, has made it a favourite. Two new varieties, ‘Taupo Blaze’ and ‘Taupo Sunset’, will make it even more popular, as they both have extra colouring, with pink and crimson shades, especially when cooler and drier conditions prevail.
These two new varieties have quickly become very popular with landscapers - and are on the “hot” list in America too. They work well in most garden situations and provide a colour lift if used carefully. I have seen them used among pink and dark dwarf flaxes and they look the part. They are very much no fuss plants as well. They also flower – white flowers in spring – but in this case, it is the foliage that is the thing.
At the opposite end of the scale are the tiny (but perfectly formed) flowers of the native Fuchsia, F. procumbens.
This is a great groundcover for damp, shady areas, and even though it grows naturally in the north of the North Island, it will also grow well down this far south. It will likely loose its leaves for winter, but will soon leaf back up in early spring with small, bright green, rounded leaves.
And then the little flowers pup up – and I mean up. Unlike any other Fuchsia, these guy likes to hold its flowers upwards rather than downward facing. The flowers are also very unusually coloured, being yellow, with bright blue stamen. They are very small, so I like to grow a plant in a hanging basket, where it is possible to see the flowers up close.
The flowers are followed by bright red berries in late summer into the winter. They are meant to make a nice jam, but I can never bring myself to pick them as tghey look so attractive.
Maybe they would also make a good salve for hands covered with injuries from weeding Wild Spaniards!
Posted by Unknown at 8:49 AM