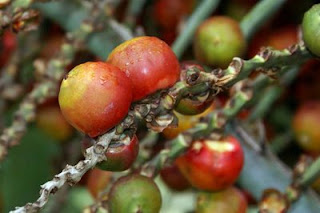 I think it was the poet John Keats who referred to autumn as the season of mists and mellow fruitfulness – a wonderfully evocative description of the time of the year when the sun’s powers diminish and the air cools. This cooling is usually accompanied by an increase in rainfall, but this year late summer and autumn have been marked by a prolonged settled and dry spell, nowhere more evident than on the East Coast of the North Island.
The Head Gardener and I made a trip up to Gisborne in the last week or so, stopping for a while in Napier. The fruitfulness was evident everywhere; Feijoa trees laden with their fragrant swelling fruit; mature persimmons hanging like Chinese Lanterns on trees with colour-changing foliage, and even ripening pomegranates.
Pomegranates are not the easiest of plants to grow in inland parts of New Zealand – they like cool winters and hot summers (which we provide very well) but they are also frost tender, and a good winter chilling will see them struggling.
We have sometimes grown the dwarf form, Punica grntatum ‘Nana Pleno’ in our gardens. This has double orange flowers, looking rather like a bright carnation and was once a very popular shrub, as its dense twiggy growth habit, and the summer-long smattering of flowers made it welcome in shrub borders. Today its deciduous nature has made it less popular.
The double flowered forms do not fruit – you need a single-flowered variety for that. In the Mediterranean, where this is a treasured fruit, the trees can grow to about eight metres high, and look spectacular when in flower. They are a challenge to grow well in New Zealand, but in a warm, sunny position in a sheltered area, where the frost will not be a problem, they should fruit well and given a normal East Coast summer – long and hot – they should have enough time to ripen.
The fruit should be harvested when it has turned bright red, and gives off a metallic sound when tapped. They will keep well at normal house temperatures – in fact, the flavour intensifies as they mature.
Posted by Unknown at 8:28 PM

Love, love pomegranates! Thanks for your post, this plant and its fruit deserve an attention and respect!