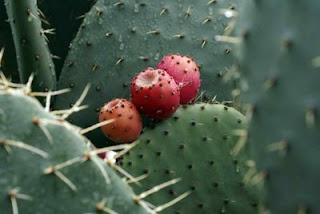 While we were walking around the Gisborne Botanical Gardens recently the Head Gardener and I came across a large cactus collection donated to the city some years ago. Much of the collection was housed in an attractive looking glasshouse, which was closed. I read that it is closed each weekend, which seems somewhat bizarre, but there you go.
There were a large number of prickly customers outside though, including some Opuntia species that were in fruit. When I pointed out the fruit to the Head Gardener, and told her my brothers and I used to eat them when we were children, she looked flabbergasted and a little horrified.
My mother had a small collection of cacti in a large built-in planter box alongside our living room window, in a warm, north-facing position. She always said it was to deter my father from coming home drunk, and as I can not ever recall him doing so, I guess it worked.
There were a couple of Opuntia species. These are the cacti with fan shaped leaves, covered with clusters of fierce spikes. One had “fish-hook” spines, each end tipped over to make extraction even more difficult. One of my uncles fell foul of this brute when he was painting our house and had to be taken to the emergency department to have the spines removed.
The other variety was similar to the species that is such a pest in the dry parts of Australia. When introduced to the large, dry expanses of the outback, these species thought they were back home in the Americas, and took off like wildfire.
Our specimen was hacked back periodically but still grew to the roofline. Each year it had an abundant display of single yellow flowers, followed by a good crop of what we called “prickly pears”.
These little fruit were covered in small prickles and needed careful handling, but they were filled with a crunchy fruit with a flavour reminiscent of water melon. They were packed with tiny black seeds. They can be used to make jellies and jams – even ice cream – but our culinary adventures were confined to eating the fruit raw.
With the trend to edible gardens that is sweeping the world, maybe we could all take up growing a crop of “prickly pears” to make up our “five a day” vegetable and fruit quota.
It is probably easier to grow some other pears though – either European or Asian pears are a lot safer to grow, and can be grown in a confined space without putting any of the family at risk!
Posted by Unknown at 7:43 PM