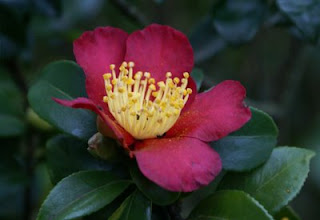 One of the interesting imponderables facing gardeners in the next few years is going to be the fate of the much-fancied camellia. All flowers come in and out of fashion, and the camellia has certainly had its peaks and troughs of popularity. In Victorian times the heavily doubled, and intriguingly splashed, formal types were in favour, but in the 1970s and 1980s, more relaxed forms, with plain colours predominating, became the norm.
They once again became very popular with gardeners again. Their evergreen manner and the dark glossy leaves that look so attractive even when the shrub is not in flower, made them favourites with people looking for year round value, and a more easily maintained garden.
Then along came the dreaded flower blight and everything changed again. This horribly disfiguring disease is caused by a very virulent fungus and effectively destroys the beauty of the blooms by browning them. There is no sign of any effective control yet, and those who passion is growing camellias must be throwing their hands up in frustration.
For us general gardeners, who are faced with messy camellia bushes, there are a couple of little tricks we can do to help things.
I have read other garden writers talk about extra care with hygiene being a partial solution, but frankly, I think they are dreaming. The theory is that because the disease is soil borne, if all diseased flowers are swept up from underneath the trees and deep mulch applied, the spread of the disease will be halted, and some form of control attained.
I think the advice is at best hopeful, at worst misleading. The spores can clearly move in the air, as its spread throughout New Zealand was remarkably quick, so any thought of sweeping up all the bold flowers to keep the disease at bay is just fanciful.
The answer is to plant Camellia varieties that get their flowering out of the way before the disease starts to kick in, in August and September. The best varieties to go for are the sasanquas
These are derived from a species grown in Japan for centuries, valued for its white flowers and gentle scent. It flowers from early autumn into the early winter, although other types flower later in the winter, even into early spring.
They have a more open growth habit that the more familiar Camellia japonica and hybrids, with narrower leaves and willowy growth in many cases. They make wonderful wall shrubs, when allowed to splay out in one dimension, but some of the denser growing forms also make very good hedges.
‘Yuletide’ has certainly become the most popular of the reddish forms, with compact growth and a great display of single red flowers, each filled with a great boss of golden stamen. This is a very tidy grower, and although it is not the fastest growing of the sasanquas, it still makes a great hedge.
Posted by Unknown at 4:55 PM