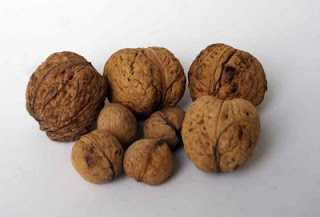 This season has been wonderful for feijoas. Our own tree has cropped well despite a fair measure of neglect, and a friend has kept our breakfast plates overflowing with enough large fruit to sink the muesli under a sea of milk. Delicious.
There has even been enough to make a few feijoa and walnut cakes. Fortunately we have also been given some fresh walnuts to use in the cake, as our small section could not harbour a walnut tree.
Two friends have given us walnuts, and the nuts could not be more different. One set of nuts are small and bullet-like – the second lot are large and easily crushed, with a large number of them filled with delicious meat.
Walnuts are among the most popular of nuts in New Zealand, and once upon a time, when gardens were all larger and people were more concerned with a higher degree of self-sufficiency, most backyards would have featured a large walnut tree. Maybe with the increased interest in home produce, we might see a swing towards growing walnuts, and other nuts, again.
The so called English walnut Juglands regia, (it comes from a wide stretch of Southern Europe and Asia but not England), is the most commonly planted walnut by a long way. It is a rapidly growing, ultimately tall tree, so some thought needs to be given to its placement. Your neighbours are not going to be too happy if you plant it along a fence line and take out all their afternoon sun!
Choose a deep, well-drained fertile site, preferably with some shelter from the worst of the spring winds, which will give the foliage a going over. If you are in a cooler area, make sure it is not planted into a frosty dell as late spring frosts will play havoc with the flowers, meaning little or no nut production.
There is some debate about whether it is important to choose a grafted tree or not. Some companies insist that seed grown trees will catch up with grafted varieties after ten years or so, while others insist that it is always best to go with a grafted form. The seed grown trees will be bigger, but they will take longer to crop and you will not be absolutely certain what the nuts will be like. On balance, I think it is best to pay the higher price and get a grafted tree. They will be quite a bit dearer, but a walnut tree is a long term investment.
Posted by Unknown at 2:02 PM