Rosemary, I love you 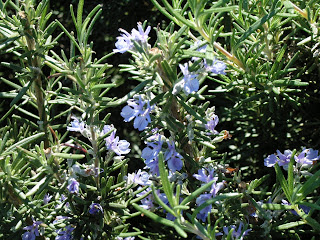 I was trying one of my favourite winter meals this weekend, a roast leeks and fish dish from one of Jamie Oliver’s cookbooks. It requires the use of a few herbs, so I raced out into the wild windy and watery evening to grab a few sprigs of rosemary and thyme, only to find my rosemary was an ex-rosemary.
It was my own fault.
I had planted the trailing rosemary a few years ago, on the edge of an elevated garden bed, but I had planted it near a Magnolia grandiflora, which has grown in the interim, and now completely shades the area where my rosemary should have been. A self-sown kohuhu, Pittosporum tenuifolium, with small grey scalloped leaves, has also grown in the area, so my poor old rosemary did not have a chance really.
Rosemary, Rosmarinus officianalis, is a Mediterranean plant and needs full sun and good drainage to succeed well. In the past I have found they will flourish on the edge of elevated gardens, and will even survive in dry stone walls, as along as they are well watered during their establishment period.
Once growing they should need no watering or feeding, and will only require the occasional trim to keep them tidy. They are not predated by any insects that I know of, and will prove hardy down to more frost than you will find in our area. They make a great seaside plant, as the “marinus” part of their Latin name will let you know.
They are, of course, useful plants inside the house as well. Oil of rosemary is an important ingredient on Eau de Cologne, and it is an important ingredient of numerous culinary recipes. Sprigs are said to impart a lovely flavour to barbecued meat if they are thrown on the embers.
I will replace my one soon, and will probably use an upright one this time, in a different garden. ‘Tuscan Blue’ is probably the best erect form. It has rich green foliage and deep violet-blue flowers. It makes a rigid upright form, quite narrow when young, and as the branches sprout from the base, it can be used to make an effective hedge. .
‘Lockwood de Forest’ is a prostrate form of the above variety, with the same deep flowers and dark, narrow foliage. The other common weeping form, ‘Prostrata’, has much lighter blue flowers, and lighter green foliage. It does make an interesting mat, almost assuming bonsai like growth at times. It is fabulous for use among stone walls or elevated rock gardens.
There is a pink flowered form around, but the “pink” needs to be seen through rose-coloured glasses to be satisfactory. There is also a white flowered form, but the flowers are not clean, and surely the point of rosemary is that it is blue?
Some friends in the local herb society recently gave me a copy of a small book they have produced called ‘Herbal, Green and Practical Tips’, which is a useful compendium of useful hints and remedies – I guess it is the accumulated wisdom of centuries of gardeners. I looked in it to check something I was told when a child - that rosemary made a good hair conditioner. Sure enough, there it is in the book – use rosemary for greasy hair!
The book also recommends rosemary for use with lamb and chicken (not fish I noticed!) and a few leaves in a cup of tea are said to give a pleasant taste, and also help the memory work well (if you remember to do it of course) and aid the nervous and circulatory systems.
This was a not of much use to me – I have no rosemary bush at the moment.
Posted by Unknown at 8:50 PM

Good dispatch and this mail helped me alot in my college assignement. Say thank you you for your information.