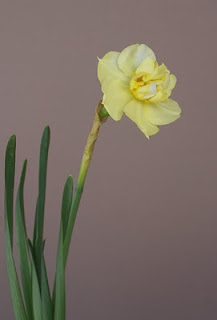 It has been another wet week, but it has been an interesting one for me.  An old gardening friend called in to see me with a potted daffodil bulb, wondering what variety it was.  It was a small cupped variety and the petals seemed a very unusual colour – sulphurous green/yellow, with deeper green infusions.  It has me quite flummoxed so I took it up to see another gardening mentor who has a passion for dwarf daffodils.
She thought it was probably the variety known as ‘Yellow Cheerfulness’, saying it was variable in colour depending on where it is grown, and that it would probably go more yellow as it opened up.
I have never grown ‘Yellow Cheerfulness’ despite growing most of the common members of that tribe of narcissus, and knew it mainly from selling it for many years, always in packets that show it as bright gold.  Turns out the packets were very misleading – it is actually light yellow, fading to almost primrose, and does sometimes take on a decided greenish cast, depending on exactly where it is grown as soil conditions can alter the flower colour.  It does, however, have a delightful scent – less heady than ‘Cheerfulness’- and I will hunt it out next autumn for my garden.
That little matter disposed of, we took a walk around my friend’s extensive garden, and she clipped little flowers from her many treasures for me to bring home in a couple of delightful tussie mussies, featuring all sorts of precious little bulbs and perennials.  But funnily enough, it is the rhododendrons that I am enjoying most now, including a couple of un-rhododendron-like looking species.
My friend has a small glasshouse in which she grows all sorts of interesting plants, including one of the most oddly named rhododendrons – R.. goodenoughii.  This is a lovely species of from the Vireya section, hailing from in , a dramatic species with large fragrant white flowers held above large deep green leaves.  The Waitara nurseryman Mark Jury likes this plant, saying it was not “nearenoughii” when he was first given this splendid but rare species.  He clearly liked “wellenoughii” though, as he grew it commercially for a number of years!
Vireya Rhododendrons come from the subtropical and tropical areas of the world, and are best known for their dramatically colourful flowers.  In the wild they tend to grow in the tops of trees, in a big pile of leaf litter, although there are also some terrestrial species as well.
As you can imagine, they are easier to grow in the milder areas of , but even in cooler areas such as ours, they can easily be accommodated by being grown in unheated glasshouse, or even in patio areas.  They prefer cooler conditions over summer, so need to be kept shaded and well watered.
Posted by Unknown at 2:36 PM