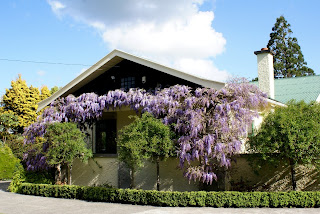 I had a phone call from a friend the other day telling me that his wisteria was about to flower and asking if I would like to call and see it in a few days.  I was glad of the call as he and his wife have one of the most interesting plantings in front of a very appealing 1920s bungalow.  A wisteria is wound across the top of a verandah, underplanted with a pair of majestic weeping standard roses which grow above a mix of green and purple weeping maples, the whole bed edged with a clean row of box.  The overall effect is very sophisticated and looks attractive all year round, but it looks at its best right now.
The wisterias are Northern Hemisphere climbers, mainly from Asia but also with one or two species from America.  The ones we grow in the garden are almost without fail the Asian ones, especially the Japanese W. floribunda and the Chinese W. sinensis, both of which are firm favourite s with gardeners the world over.
The various forms of the Chinese wisteria are the most commonly grown forms.  It a very vigorous deciduous climber which can get to an enormous size if left unchecked and in spring has long racemes of lilac or mauve flowers, always heavy with a heady scent.  It flowers in the middle of spring with a big burst of fragrance before the leaves appear and always gives a dramatic show.
These climbers are usually grown in the way my friend has grown his plant – as climbers that twine their way across wires, pergolas and trellises, or sneak along fences, but they can be kept as handsome shrubs – even as weeping standards.  I have a friend who even has a small example in a large bonsai pot and the effect is amazing.
The most commonly available variety now is W. sinensis ‘Caroline’ which has fragrant lilac flowers.  This is a real weather tamer, seeming to flower through the worst of the nor-westers without being shredded, and also coping with the rain without marking too badly.   She will usually throw a second crop of flowers in summer – a lot smaller crop of slightly pinker flowers.
The other named varieties you are likely to come across are more likely to be from the Japanese species W. floribunda, and are almost certain to have longer racemes.  The longest of all are from the variety called ‘Macrobotys’, which has blue/purple racemes of pea-shaped flowers that can be as long as a metre, although in their home country plants have produced racemes as long as 1.8 metres!  The long racemes give a longer flowering season too as the flowers open from the base, slowly working their way along to the tip. Obviously, this plant needs to be trained high enough to take account for its long clusters of flowers.
There are the usual lilac coloured forms of this species too, ‘Cascade’ and ‘Lavender Lace’ perhaps being the best known,  but it  has also given rise to a wonderful range of coloured varieties as well.   W. floribunda ‘Alba’ and ‘Snow Showers’ are delightful white varieties, as their names suggest.  They both flower at about the same time as the new leaves open, but as the leaves are bright lime green the effect is appealing enough.
At the opposite end of the colour range is the intriguing but somewhat misnamed ‘Black Dragon’ – do not expect to get jet black flowers.  In this case the flowers are actually very dark purple in the bud, but they open to deep violet.  The flowers are unusually doubled (the only variety I have ever seen that are) and very fragrant, so they are well worth having.
If you are like the little girls that live next door to our garden, you will be delighted to know  there are some pink forms too!  With both the varieties ‘Lipstick’ and ‘Pink Ice’ the buds are pinker than the flowers, but the light coloured flowers definitely have a pink cast.
Posted by Unknown at 10:27 PM