Time to think about potatoes again 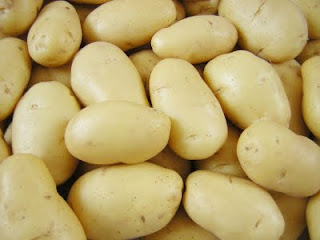 Our neighbour popped her head through the hedge that separates our two properties at the weekend, to pass on some women’s magazines to the Head Gardener, and to ask whether we wanted a few ‘Cliff’s Kidney’ potatoes, as she had bought too many for her garden.
I was forced to say that I have reluctantly come to the conclusion that I will not be planting any potatoes this season, as there are only two of us in the house now, and the Head Gardener is no great fan of potatoes – I still have a lot of tubers left from last year’s crop and I would not be able to get through them all.
There was a time when all vegetable gardens featured a mass planting of potatoes – in fact, many gardens were literally established out of a potato patch.  The custom has long gone, but it was traditional to plant a crop of potatoes on a new section, before you had even built the house, the theory being that the deep cultivation required for the potatoes would help set the land up for the later gardens and lawns.  Once the house was built and beds laid out, most garden would feature extensive plantings of a range of varieties, with ‘Cliff’s Kidney’ and ‘Jersey Benne’ being the favourites for earlier in the season, while’ Red King Edward’ and ‘Rua’ were two favourite main crop types.
If you have enough people in the family eating potatoes still, they are an easy and worthwhile crop for the home gardener, and I think all newbie gardeners should try their hand at growing a crop or two of these.  In fact, I suspect that I will be unable to resist putting just a few tubers down myself, because I do not think Christmas would be quite right without an early morning trip down to the vege patch to bandicoot a few  shining new potatoes for the dinner table.
Last year I planted two different varieties – the white fleshed ‘Rocket’ for an early variety, and the pink skinned ‘Desiree’ as a main cropper.  The idea of  ‘early’ and ‘late’ sometimes confuses new gardeners, as it does not refer to the time of the season the tubers need planting, instead being a reflection of  the amount of time needed from planting to cropping – that is, early varieties mature more quickly than main crop or late varieties.  That means that, once the season has moved on and it is getting late for planting potatoes, you are better off to plant ‘early’ types as they will crop quickly, before the frosts arrive.
Posted by Unknown at 8:37 PM