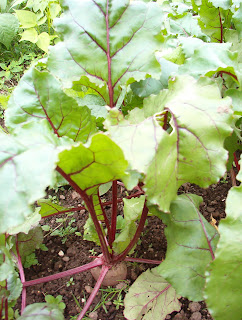 My expressed intention of not planting any potatoes this year turned out to have been hollow – a week after I told everyone I was not planting any I found myself looking at the remains of last year’s crop and thinking – “The ‘Rockets’ have sprouted really well “and I succumbed to the temptation and planted short row of both ‘Rocket’ and ‘Desiree’.   They will be ready to harvest in time for Christmas, which will make the Dunedin-based son happy, as he had made comment when he rang for Father’s Day.
I spent the afternoon of ‘Father’s Day’ in the garden, well togged up because it was quite cold.  I was mainly working in the flower beds, as there were a lot of weeds germinating and I like to get them out early, but I also made the time to do some work in the vegetable garden.  It is important to get the garden ready for spring at this time of the year, and as soon as the soil is dry enough to be worked, it is a good idea to get any fertilising and composting needed under way.
The first thing I did was to shift the carrot bed.  We find carrot rust fly to be a problem, and nothing chemical has worked for us.  We were almost at the stage of giving up growing carrots when we decided to try a bit of physical exclusion, firstly by using a large white shade cloth covered cloche, then by using small wooden walls around the edge of the carrot patch.  It does not need to be very high – 100mm would probably be enough – and it does certainly help.  The theory is that the fly comes in at ground level, so an obstruction stops the fly getting in to lay the eggs that later hatch and cause the unsightly damage to the carrots.
Soil preparation is very important with carrots.  They need fertile soil, but do not like fresh manures at all, so it is best to plant them in soil that was prepared for a leaf crop the previous year – brassicas or lettuces perhaps.  If you want to add a fertiliser, any good general one will do the trick, but you could also consider one of the slow release types as well.
If the rust fly has been a problem, try and sow as thinly as you can, as the flies will hone in on the scent of the thinnings, so the less you need to thin the better.  I did not sow any seed this weekend – I want the bed to settle down a little – but it is the right time to put the first sowing in.  I like to mix the seed up with some sand as it helps sow more thinly.
There are many different varieties around but I think it pays to try and find some F1 seed if you can – it is quite a bit dearer but the crop is more reliable and the crop is hearty.  We grew a purple variety the year before last, which was great fun, but to be honest they were not the best croppers, and I do not think we will be doing that again.
Posted by Unknown at 9:33 PM