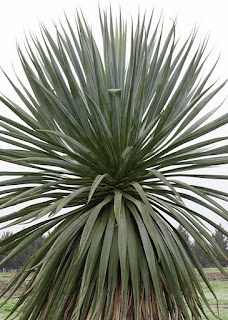 One of the delights of gardening is its very seasonality, the way as gardeners we become attuned to the ebb and flow of the year.  In spring we relish the emergence of the daffodils, and we plan for the upcoming planting season for the vegetable garden.  In summer we glory in the harvest of our sub-tropical crops (capsicums, tomatoes, cucumbers), while in autumn we marvel at the glory of the changing colours of the leaves.   In winter … well, in winter we hibernate, pull out our plant catalogues and plan another growing season.
But there are other regular patterns too, ones that garden writers come to experience.  One of these concerns an unusual and interesting plant that seems to puzzle people about every seven years or so.  Late last year the enquiries started about it again.
People get in touch to ask about a strange plant they have in their garden that looks a bit like a flax on a stem, or perhaps some kind of Agave (if they know what that is!) that has grown a trunk, and then flowered with an enormous and odd looking inflorescence.  This flowering stem, with pale white flowers, then does another unusual trick – instead of setting seed it produces small bulbils that can easily be detached and will thrive if potted up.
And when they get in touch I know that it is a flowering season for Furcraea parmentieri (formerly F bedinghausii) – and that might cause heartache for the gardeners who get in touch, but more about that in a second.
Furcraea parmentieri is a wonderfully dramatic plant with great architectural value, its handsome blue-grey foliage making it a popular garden plant in many parts of the temperate regions of the world. Although it comes from the arid regions of central southern Mexico at altitudes of 2500m-3000m and thrives in dry, free-draining poor soils it is hardy.  I have seen clumps of this plant used to great effect in the Dunedin Botanic Gardens.
But there is heartbreak for those who love this plant – like many of its relatives it is monocarpic – it flowers just once, in an amazingly dramatic fashion with a spike that can reach up to three metres, then goes into a rapid decline and dies.
The odd thing is that many of the plants in the region seem to die together.  I assume they have come been planted at the same time and whatever climatic trigger causes one plant to flower affects others raised at the same time.  A recent Times-Age photograph showed three plants along the front of a house, no doubt planted for their architectural value, now in full flower and about to die!
The last time we had a mass flowering of these plants I collected up some bulbils, and grew them on in the glasshouse, intending to plant them out.  I never actually got to put them in the garden, and gave most of them away, but I have two growing in large pots and they look very attractive.
Posted by Unknown at 8:25 PM