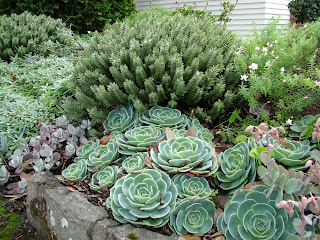 We have interesting discussions in our family about the role ‘nature’ and ‘nurture’ play in shaping our personalities.  On the one had we have the geneticist son, on the other the teacher Mum, each arguing their corner, until finally agreeing that both have a part to play even if they do not agree on the ratio.
This argument is especially interesting at the moment as our younger son has re-developed an interest in gardening now he is established in his Wellington flat.  He had gardens in the nursery, filled with miniature roses, and a small garden here which is nominally his although he has never done any work on it.  Now he is settled in a flat his innate (or nurtured, depending on where you sit on that debate) love of gardening has come to the fore and he has made his first real gardens.
Interestingly, he has planted lots of colourful annuals, including bedding dahlias, petunias, Livingstone daisies and marigolds, despite saying he saw far too many of them as he grew up helping in the bedding plant nursery we owned.
But he has also got interested in succulents, which I guess is only to be expected as it where so many of us find our interest in gardening first stimulated.  I still have a pot of a small Aloe species that came to my from my grandparent’s sunroom, via my parents patio.  I think it is Aloe aristata, a species that was once very common as a pot plant, mainly because it was so easy to keep going.  Just pop it in a well lit area and it will flourish, eventually sending up a 30 cm tall stalk of pinkish-red tubular flowers.  Over time the mother plant will form little offspring around her bas and will eventually develop a nice clump of dark green, tight leaved rosettes.
There are so many different succulent plants, with an almost infinite number of different hybrids that it may pay us to define exactly what we mean.  Generally speaking, succulents are regarded as being plants that in the wild grow in arid regions, and have developed water retention tricks to help survive sustained dry periods.  They usually store water in their leaves, although some do so in their stems, and a few have evolved to do it in their roots.  Many of them have also developed silver foliage as a way of combating excessive heat.
Many can be grown as pot plants, and they are good plants for beginner gardeners to start with as they will forgive the errant waterer.  On the other hand, of course they do not like too much water, so will quickly die of kept damp.  In the garden they can provide a very useful counterpoint to other foliage colours, and they are well adapted to growing in those difficult warm and dry spots near houses or on banks.
The most common of these are the Echeveria species and hybrids, part of a group of over 150 species native to the Americas, from Texas to Argentina.  The leaves, which are usually silver, form symmetrical rosettes either sitting on the ground or at the end of long stems. Some types make multi-stemmed shrubs growing to a metre tall.  They can withstand long periods of drought and will grow in a variety of garden situation, but for or really intense colour they prefer to be in a well drained position with plenty of sun and air movement and regular water.  The most commonly-grown forms are the smaller growing silver leaves species that are used for edging in dry conditions. They generally flower with a spike of orange/yellow flowers in early summer.
Posted by Unknown at 3:49 PM

believed a lot of people repay his or her loans by the due date as well as while not outcomes
A leading debts charity wants the sheer number of consumers checking out these people regarding help around payday loans bills for you to double this specific. unsecured debt charitable trust says around manipulate a short term, high fascination fiscal loans this holiday season. Your good cause tells four years back may be customers using them was simple.
pożyczki prywatne
pożyczki od osób prywatnych 2012
zobacz adres naszej strony internetowej
pożyczki przez internet bez wychodzenia z domu
szybki kredyt dla nowych firm