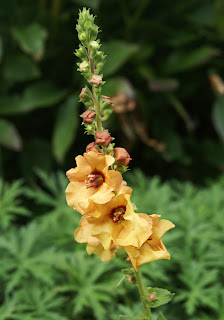 I have been planting out some birthday presents this week.  It seems I am officially so old now that I am reduced to selecting my own presents, and also so old that the most exciting things I can think of to brighten up my life are some new plants for the garden.   Having an autumn birthday means I often get bulbs as a presents (and welcome they are, always) but this year I decided I wanted to jazz up my perennial border for autumn so I picked out a few things to brighten and better colour coordinate it.
The first of these was a pretty coloured Verbascum called ‘Sierra Sunset’.  Verbascums are commonly called “mulleins” and some species have made a bit of a nuisance of themselves by seeding alongside roadways and through riverbeds.  The most common of these, but not the only one, is the world-wide weed V. thapsus, the woolly mullein.  This has very woolly silver leaves and sends up large spikes of yellow flowers.  It is not normally too much of a problem in crops or in the garden as it really prefers very disturbed soil (roadside gravel seems to suit it well, as does a gravelly river bed).
There is quite a range of garden hybrids available now, mainly in earthy tones of peach and apricot, although there are also a lot of purple coloured forms.  Verbascums are lovely plants, with spikes of flowers that look like refined hollyhocks, although they generally only grow about 150 cm high.   They also tend not to be very perennial, and often die out after a year or so (some species are biennial) but they also self seed slightly.  The resulting seedlings  are generally pretty close to the original plant in colour.
‘Sierra Sunset’ is more compact than many forms, growing less than 100 cm high,  and has large peachy orange flowers borne on sturdy stems, which pop up from rosettes of soft green leaves from early to midsummer.  I am especially keen on using its soft orange colour to combine with the more orange Crocosmia ‘Lucifer’ which is growing nearby.
I also fell for another subtly flowered plant, a “yellow” Shasta daisy.  Leucanthemum  ‘Banana Cream’.  I am not a great fan of white daisies – apart from those in the lawn I do not have any in the garden – and there is no shortage of yellow daisies in flower through the summer, but this is something slightly different.  It has large, soft lemon daisy blooms stand on top of sturdy stems above dark green foliage.  The flowers definitely fade as the age, and they end up being pretty close to white, but the soft cream is a very attractive colour, and like most Shasta Daisies, this will pick well for the house.
My mother always had clumps of pure white Shasta Daisies in her garden, and they did very well for her, so I am hoping this recent introduction will prove as hardy as and generous with new growth.  It will flower through most of the summer if the flowers are kept picked, and flowers at about 45 cm high – perfect for the front of the border.