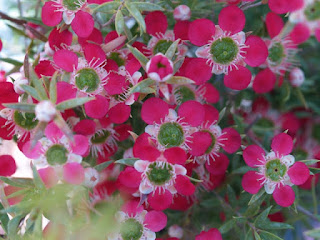 Some years ago I got myself caught in the middle of an argument with a plant breeder from a scientific institute from the South Island, by suggesting that sometimes scientists might not be the best people to be breeding plants for the commercial horticulture business, and further saying I thought they may have other scientific ideals that got in the way.
One scientist responded, and we corresponded for quite a while, swapping notes about the various plants we shared a common interest in.  He was particularly interested in native plants, and was excited about a cross between a manuka (Leptospermum scoparium) and a kanuka (Kunzea sinclairii), found on an offshore island, which was duly registered and made available to the plant trade, under the less-than-sexy name of Kunzspermum hirakimata ‘Karo Hobson Choice’.   And since then it has disappeared without trace.
Meanwhile, nurserymen have been fiddling with manukas for years, since the first pink flowered forms were found in the wild, then the red forms were also discovered and the double flowered forms were crossed with the coloured ones and a range of coloured and doubled forms were introduced – from California and Australia mainly.
Interestingly, the manuka, a quintessential New Zealand plant you would think, is actually quite a new migrant from Australia, where there are over 80 species.  Both manuka and kanuka are thought to have arrived within geologically recent times, their spread throughout much of the country having been aided by human intervention in the form of fires.  There are many different forms, and some variation in flower colour.  In Wairarapa the upright white flowered form is most commonly seen, but anyone who looks at these plants in the wild will have noticed there are some bushes which seem to have aberrant flowering seasons.
The most interesting array of wild plants I have ever found was on the heads of the Hokianga harbour, where light pink flowered plants in a variety of forms abound.
Australian nurserymen seem to have become  a lot more interested in raising some hybrid Leptospermums from species other than our native one recently – I am not sure that you could call them manukas as they are not indigenous, so perhaps we’ll call them hybrid tea trees, after the name Captain Cook originated when he made an infusion from their leaves.
One I noticed in garden centres this weekend is ‘Outrageous’ – and I mean that is its name.  It is one of a number of colourful cultivars developed at Bywong Nursery at Bungendore, New South Wales, a cross between two Australian species.  It is a medium shrub which grows to about two metres high with drooping branches and narrow leaves about 15 mm long, with a more green tinge than our manukas usually possess.
The five petalled, deep red flowers are larger than usual for a manuka, being about 20 mm diameter, and have a have a green centre which contrasts well with the red petals.  Its parent species are said to be hardy so this could be an interesting addition to the range of Leptospermum varieties available in this country.
One of its parents has mauve flowers, so if ‘Outrageous’ was crossed with New Zealand forms we might be able to extend the range of colours found in the cultivars already on offer.
Posted by Unknown at 8:52 PM