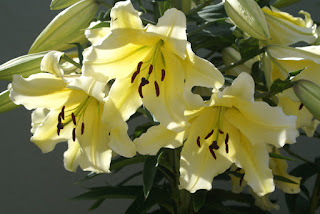 It seems that each summer has a theme in the garden.  It might be a cool and wet year, where the traditional summer crops like peppers, egg plants and tomatoes really struggle but green-leaved vegetables like lettuce relish it and flourish.  Or it might be a very hot and dry summer which gives the flower garden hell, meaning bedding plants shrivel up and roses drop most of their leaves by the start of February and look dreadful.
This summer will be the year of giant lilies in my mind.
A couple of weekends ago a gardener who is a friend of friends rang and asked whether I would like to help identify a large lily that had many, many flowers she had growing in a pot at her back door.  It was a little out of town in a country garden so I happily set out one evening to have a look, more or less expecting it to be an Asiatic or Oriental lily that had been infected with a virus, leading to a dose of fasciation.
Fasciation is a common side-effect of virus infection in many plants, causing “witches brooms” on deciduous trees and distorted growth on perennials.  In lilies it causes increased growth rates, flattened stems and a remarkable profusion of blooms, with literally hundreds of smallish flowers clustered at the end of the stems.  I was expecting having to explain that this had occurred, and that it was probably just a one-off and the bulb would recover.
But what I saw was a remarkably healthy looking lily, growing profusely in a huge terracotta pot, with lots and lots of flowers opened and opening,  and plenty of buds to come – with not a sign of fasciation anywhere.  The flowers were a very soft cream (almost white) with soft yellow centres, about 20 cm across and slightly scented.  These glorious flowers were borne on stems over two metres tall, making this a very imposing sight.
I was flummoxed as to what it was, thinking it was probably one of the hybrids between the Oriental lilies, such as the glorious Golden Rayed Lily of Japan, Lilium auratum, and the Asiatic species in the Trumpet group, including the likes of the Christmas Lily, L. regale.
When I got home I looked through my catalogues and thought I had come up with the answer in a catalogue from a South Island grower, a Oriental/Trumpet (OT) hybrid called ‘Con C Dor’,  only it was described as growing one metre high.  When I went delving into the on-line registration catalogue things got a bit murkier as I could not find any ‘Con C Dor’, but eventually I found it, under its proper name, ‘Consa d’Or’, where it was described as growing five feet in England, so I guess the extra foot can be put down to our better growing climate.
Then this week in the Times-Age I saw a photograph of another gardening friend (and ex-client of our nursery) Jean Farley standing alongside another giant flowering specimen of what appeared to be the same variety.  It was interesting that in both cases the plants had come from potted gift plants, suggesting they had perhaps been sprayed with chemicals to keep them small as I cannot imagine a two metre lily in a pot being a good gift for a hospital patient!
Posted by Unknown at 3:15 PM