So it was a sunny day, and I was under strict instructions that I was not to go into the wilds of the Upper Ruamahanga River on my own, looking for the hidden lake that lies between the aforementioned river and its tributary,  the Ruapae.
So what to do.  It is still, calm and cool at 7.30 but I know it is going to get nicely warm.
Of course, I'll go up Taratahi/Mr Holdsworth.  All the time my son David was home, especially when his lovely partner Ana was here too, we hoped to go for a bug hunt/tramp in the hills, but it never happened, usually because the weather was too wet or too windy.
Of course, now that they have gone it was fabulous!
.
The tramp was delicious!  The first of the Thelymitra are in bud at Rocky Lookout, and there are a few in flower in the Pig Flat swamp.  And there are those who say our wild flowers are dull! 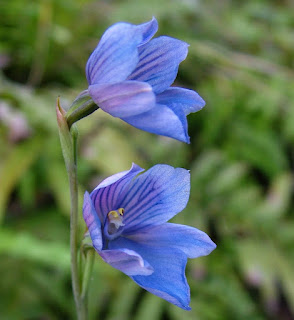 I wish I had David for the walk though.  On the alpine part of the walk I saw what appeared to be three different species of grasshopper; a large green, a large brown, and a much smaller green form as well.  There was a collection of moths fluttering around, mostly too ephemerally for me to be able to identify them, then as I wandered (or more correctly staggered) across Pig Flats on my way back down a beetle (?) landed on my arm - about 2 cm long, dark and slender with four prominent spots on its wings.
And for the life of me I cannot find anything that looks like it online.
Might have to get that macro lens for my camera after all.