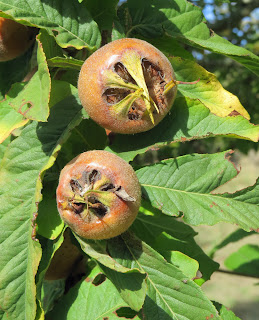 The Head Gardener and I wandered around Eastwoodhill Arboretum one morning recently   while on holiday in Gisborne, delighting in the various coloured trees – mainly oaks at this stage, but also many other types of deciduous trees.  It was quite dangerous in places, because the pathways were strewn with thousands of acorns, and I kept imagining those with less steady footing falling over easily.  We had the obligatory map but were quite happy to just follow our noses, usually following Robert Frost’s dictate about the road less travelled.

We came across an area that seemed dedicated to edible plants of the more unusual kind, included a medlar, Mespilus germanica, in full fruit.  I have seen the fruit before, and have seen trees before, but have not seen a tree laden with fruit before.  It is an interesting subject, being a member of the vast rose family (as are many edible fruits) and seems to fit somewhere between the pear species (of which there were many at Eastwoodhill) and the hawthorn.

It makes a small tree, growing about five metres high, with a similar spread, and looking not unlike an apple.  It also has the great habit of colouring up well in the autumn, usually taking on yellow and orange shades.  Before then, though, the fruit become ready for picking.  They are unusual-looking fruit – sort of like oversized rose hips in a way, brown and with a calyx on the crown.

This southern European fruit was once quite popular but has fallen from favour, probably because so many similar fruits, such as apples and pears are readily available, and you do not have to wait until the fruit is rotten to eat them.   The technical term is “bletting”, but it amounts to the same thing.  After two to three weeks in storage,  the fruit becomes soft, mushy brown, and is said to be both sweet and tasty, with a hint of spicy applesauce.  If you do not fancy eating rotten fruit, perhaps it would be better to make a jelly from the fruit – it is also said to be delicious.

Before we left for holiday I had someone come in to see me at work, holding what at first appeared to be a semi-ripe mango.  When they explained it was growing on a tree in their garden in Masterton I soon worked out it was not a tropical fruit of any kind, but was a little puzzled.  I cut the fruit open and could see lots of seed inside, and could discern very little scent– but there was just enough for me to realise what it was.

What I was looking at was a fruit of an unusual deciduous shrub from China, fruit I had not seen for about twenty-five years.  It was from Pseudocydonia sinensis, another aromatic fruit tree from the rose family, and another that is basically inedible!

This is an attractive small tree – only about three meters tall – and is closely related to both the quince tree of Europe, and the ‘japonica’ of the garden – Chaenomeles species. In spring it has pale pink flowers, which are later followed by the ovoid fruit, about the size of a large pear.  They are green for a long time, then take on reddish hints before turning butter yellow as they ripen.  They have a wonderful aroma, and a bowlful of them will scent the whole house.

These fruit are very astringent and very hard, and no amount of bletting will make them edible (at least not in my estimation) but they do have a use – they make the most wonderful conserve, not unlike quince conserve but much more aromatic.  We had a specimen of this tree in our nursery, probably about fifty years old or even older.  It only fruited once for us but what it lacked in regularity it made up for with enthusiasm, being heavily laden.  A young student,  who was working for us on work experience, decided he wanted to use the fruit and took some home to make the conserve.  I’m not sure if he or his Mum made it, but it was superb – it went really well with stewed apples.

I think I’d prefer a jar of that to some freshly bletted medlars.

My partner and I stumbled over here coming from
a different web page and thought I should check things out.
I like what I see so now i am following you.
Look forward to finding out about your web page repeatedly.