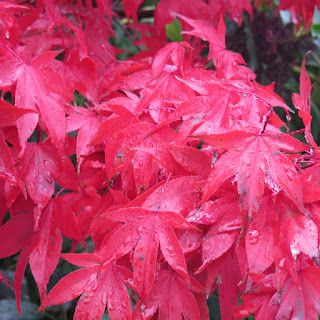 This year’s long and very warm summer has been followed by an equally protracted autumn.  It is nearly the end of May and we have not had a significant frost, and there has been comparatively little wind.   The result of that has been a wonderfully drawn-out autumn display by the many deciduous trees that abound in Wairarapa.  At the weekend we went over to Wellington and the poplars in the Abbotts Creek valley were in full golden glow, while on the other side of the hill the avenue of American oaks opposite the Birchville entrance was glowing rusty red.
We have a fiery purple Japanese maple putting on a show halfway down our drive – or, more correctly, our neighbour does, but the tree comes over the fence and gives at least as good an autumn display for us as it does for them.  I know there are two much-divided schools of thought on autumn leaves.  One hates the very thought of them, and tries to catch them before they land, and sweeps them away to oblivion instantly.  On the other hand, there are those who relish the changing seasons they herald, and delight in crunching through piles of discarded leaves.  I am very much in the latter camp, and am never worried too much about fallen leaves.  It might be different if I had huge London Plane growing outside my front door, but Japanese maple leaves  are airy and ephemeral and any inconvenience of their falling in autumn is more than compensated for by their on-going beauty through the year.
I think Japanese maples are the perfect small deciduous tree for the home garden, with their elegant shape, and their year-round attractions.  In the winter most varieties have an attractive ball-headed shape of interlacing branches.  In some cases they also have very attractive bark, especially the coral bark maple, Acer palmatum ‘Senkaki’,   which has coral pink young stems which carry bright lime green foliage in the spring.  Come winter the exposed red stems are an attractive feature, although it has to be said that the bark darkens as it ages, and it is only the outer part of the tree that carries this coloration.
Many of the purple foliages varieties also have deep red/purple stems as well, offering another level of enjoyment.  There are very many red varieties around but perhaps the best is ‘Bloodgood’, which holds its bright colouring well into the summer, before darkening and then turning bright crimson for the autumn.  This is quite an upright growing form that spreads nicely as it matures.  Like most purple varieties, it has tiny little purple flowers very early in the season – hardly noticeable unless you go looking for them but very pretty – as well as purple helicopter seeds in the autumn.
If you want a smaller version of this there is a new variety called (rather unattractively) ‘Skeeter’s Broom’.  This arose as a witch’s broom on ‘Bloodgood,’  a tightly growing mass of smaller branches often seen on silver birches but rarer on maples.  It means that this variety has much twiggier and denser growth than its parent, while retaining the same colouring.  It also means its ultimate height is more restrained, growing perhaps two metres tall and about half that around.
Another cultivar that supposedly originated as a sport of ‘Bloodgood’ is the shrubby ‘Shaina’, which forms an outstanding small globe-shaped tree with very dense purple foliage.  As well as being great in the garden this one also makes a tremendous patio plant, and for those who are so inclined, a great bonsai as well.
If you want to go even smaller you are in the realm of the dwarf, weeping maples – among the most desirable of all dwarf trees.  I think ‘Crimson Queen’ is as good as any, with its finely dissected foliage slowly turning from bright crimson in spring, through to deep, dark purple for summer, then switching to scarlet for the autumn.  Like most of the dwarf varieties, it has naturally arching growth that will fall to the ground if left, and looks spectacular at any time of the year, including winter when the clear, clean outline looks very attractive.