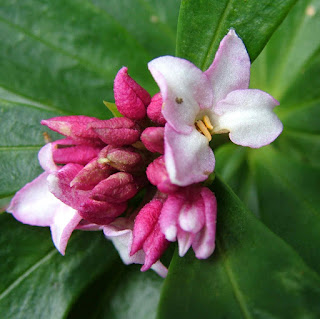 At work I have been helping a lovely lady called Daphne with some research, and I guess my subconscious has been hard at work as my mind has been filled with thoughts of those sweetly fragrant favourite plants all week.
I suppose it could also be something to do with my first real acquaintance with the newly-arrived (in New Zealand at least) hybrid that glories in the name of D. x transatlantica, although in our country it is usually met with in the form of ‘Eternal Fragrance.’
This plant is a hybrid, the result of a naturally occurring cross between two species seldom seen in New Zealand,  D. collina and D. caucasica, combining the small stature and strong fragrance of the former with the fragrance and long blooming period of the latter. It is sometimes possible to find D. collina in New Zealand – usually further south than here – and there is a lovely pink-flowered hybrid called, somewhat bizarrely D. hybrida, that can be found in some garden centres.
Daphne ‘Eternal Fragrance’ is a compact, semi-evergreen, mounded shrub that blooms with gusto in early spring, then continues from October to the first frosts of winter with small clusters of fragrant, pink-budded white flowers.  This plant has become very popular overseas and looks likely to be as popular here, being longer-lived than the more commonly grown forms of Daphne.  It is also a very tidy growing form, and will grow well in pots – in fact, I have even seen overseas magazines that have shown it used as a hedge, but that may be taking it too far!
Overseas there is a variegated form called ‘Summer Ice’, with a lovely white rim around the edge of each of the fine leaves, but I have not seen it offered for sale in New Zealand yet.
I am looking forward to planting ‘Eternal Fragrance’ soon, as over the years I have grown more kinds of Daphne that I care to remember - at least ten forms I would think.
The most popular of these are the various forms of Daphne odora, the daphne that most people know as the common variety.  Nowadays this is usually encountered in the form of the strongly upright growing form known as ‘Leucanthe’, and its white counterpart, ‘Leucanthe Alba.’  These are both lovely shrubs that carry superbly fragrant flowers in great abundance in later winter and early spring.  The scent is very heady and spicy – some have described it as being reminiscent of jasmine, another heady-scented shrub.  However, like many Daphnes they can be slightly temperamental, and it does not pay to get too attached to any one of them, as they are prone to slowly slipping away.
They are a bit fussy as to soil – they need slightly acidic conditions, with humus-rich soil that does not dry out in summer, or become waterlogged in winter.  They can cope with full sun, but I think most do best if they are grown where they will get some shelter from the worst of the afternoon heat.  They do not like being replanted, and are best replaced with container-grown stock.  They are not too fussed about heavy pruning wither – it is best to nibble away at them throughout their life.  I find one good way is to remove the flowering buds, either when they are in flower (they are great in the vase) or shortly after they finish.  It helps keep the plants compact too, as they can get a bit straggly.
There are a couple of other forms of D. odora that are with looking out for.  The old form, ‘Rubra’ has the deepest coloured flowers, although I have to admit it is a slightly untidy grower, the branches dipping off at their own behest.  This is the form our grandparents grew.
As a general rule variegated plants are not as hardy as those that are fully green – it is obvious when you think about it as they have less chlorophyll and as such are not so efficient at growing as their more complete cousins.  But this does not seem to be the case with daphnes, as the classy ‘Aureomarginata’ seems to be tougher than its green counterpart.  I love this lovely plant with its lively yellow rim around the edge of each dark green leaf, and it does seem to survive longer in the garden than the plain-leaved types, which can be a little transient.

Can I simply just say what a comfort to find someone who actually
knows what they're discussing on the internet. You certainly realize how to bring an issue to light and make it important. A lot more people really need to read this and understand this side of your story. I was surprised that you're not more popular since you surely have the gift.