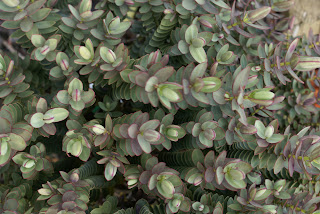 The combination of the week’s mild weather (despite it being the middle of winter) and a bit of time at home, led me to have a wander around, looking at what is happening in the garden.  As it is still very early in the season I was surprised to see a number of spring flowering bulbs out in flower. The tazetta narcissus (that most people call jonquils) are out, but as they can flower very early I was not shocked, but I was very surprised to see the little green and black flowered snake’s head iris, Iris tuberosa, in flower, at least a month early.
A clump of hyacinths I planted in the autumn was in flower too, the pale yellow ’Yellow Queen.’ I suspect that this might be a case of an imported bulb breaking cover early, and that it will revert to its usual flowering period next year.
I also had time to look at a couple of shrubs that I knew needed trimming or removing.  One was a seedling kohuhu, Pittosporum tenuifolium.  It was a lovely small-leaved form, with a shimmering silver colour, but it had grown up through the lower branches of a semi-mature Magnolia grandiflora, and was rapidly growing to be a nuisance, and really had to come out.
The other problem was of a smaller nature – a dwarf dark-coloured Coprosma, whose growth ambitions outgrew the space I had allocated for it. It was also very free with a crop of berries each season, and as such also had a crop of seedlings each year.  I am not normally too worried about seedlings appearing among my plants (it’s a natural consequence of using lots of mulch among shrubs) and often keep and propagate the seedlings I find, but not in this case.
I was very keen to add another hebe to the number growing in this bed, as they have proven to be very reliable in what is a difficult site.  The previous owners had altered the front of the house, and had added truckloads of soil.  Unfortunately it is of very poor quality – very much clay-based and sticky in the winter.  On the summer it dries out badly, and forms great crevasse-like cracks, and most shrubs struggle to grow in it.  However, hebes, of various stripes, have managed to cope with the soil, and in the main they have thrived.
I planted a scattering of cuttings from the strongly coloured ‘Wiri Prince’ a few years ago, and they have flourished.  This is one of Jack Hobbs’ Auckland-bred hebes, but seems very hardy here and quickly forms an upright, evergreen shrub reaching at least 1.5 metres high. The rich violet-purple flowers are mainly carried in summer to autumn, but the shrubs seem to have a flower or two at most times.
We also have a plant or two of the deep rose pink flowered ‘Wiri Charm’, which is a very tidy growing form (tidier than ‘Wiri Prince which needs to be trimmed annually) and grows to about a metre high, forming a dense shrub.  ‘Wiri Cloud’ is smaller, with crisp green leaves and pale pink flowers.  This one makes an interesting alternative to a box hedge.
We also have a number of the grey-leaved species, as I love the foliage contrast they offer.  Perhaps the best of these are the form of Hebe albicans known as ‘Red Edge’, and the stunning (and very well-named) ‘Quicksilver.’ ‘Red Edge’ is descended from a species mainly found in the mountains of Nelson province, and is very hardy.   It has a compact growth habit with a grey leaf of its parent species, but its point of difference is the pinky-red edge around the leaf. In summer the foliage colour intensifies giving the shrub a pinky hue.
‘Quicksilver’ is a form of H. pimelioides, with an open arching habit. The small grey leaves, each with a red edge, contrast well with the dark branches. The flowers are small and light blue-mauve, carried in the early summer, and although they are attractive, it is the foliage that is the winner with this plant.