A thought for my peonies 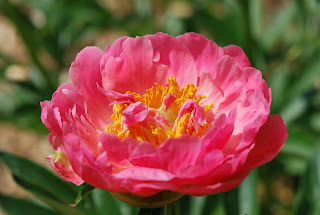 Last weekend, when the weather was at its worst, and it was windy and raining heartily, I went down to my local garden centre to choose some peonies.  Not unsurprisingly, it was very quiet and I was able to take my time and look through the racks of packets on the shelves.  I was excited to see what a good range of varieties is available nowadays, but I did catch my breath a little at the prize of some of the newer forms – they were over $30 a packet.
I am used to looking through catalogues from various bulb growing firms and I am quite accustomed to seeing daffodils and irises reaching these sorts of prices, but their value quickly diminishes and a variety that was selling for $50 one year will be down to $5 within a decade.
Not so for these peonies – although the types I was looking at were certainly relatively recently introduced, they were also all at least twenty years old.
At first I was a little taken aback, but then I thought of how long-lived peonies are, and quickly came to the decision that I would still buy a few varieties as part of a revamp of a couple of flower beds out in the back garden.
The site I had in mind is absolutely perfect for peonies as it is both sunny and well drained in a bed that was originally part of a vegetable garden, then used for lining out bearded irises.  Over the years it had had a lot of compost added to it, and thus it is deep and fertile soil, soil that is ideal for peonies.   Although it seems counter-intuitive, peonies can still do quite well in relatively infertile soils, as long as it never becomes water-logged.
It is quite important to make sure peonies do not have too much competition from nearby trees and shrubs, as they do not cope with that at all.  In fact, they can even throw in the towel if they are under a lot of overhead foliage.  I suspect the flowers might also be a bit troubled by botrytis in that situation too.
When you buy plants at this time of the year you are getting divisions from larger plants, and will usually get some roots that look very much like the rhizomes of a bearded iris, with large buds about 3 cm long, and coloured bright pink.  It is quite important to plant these correctly as they can fail if planted too deeply or shallowly.  Unlike bearded irises which need to be planted on the surface of the soil so they can creep along in the sun, these plants actually need the rots to be slightly buried.  But they should not be planted too deeply – if they are planted too deeply the buds will be insulated from the winter chills which induce new growths.  The ideal depth is for the bottom of the new buds to be about 5cm below the surface.
You do not need to add any fertiliser when planting – in fact it can be counterproductive as it may damage the new buds – and, despite their long-lived reputation for needing super-fertile soil, they are not gross feeders, and probably do not need a lot of supplementary feeding.  We have a large specimen of the pale pink, late-flowering form ‘Sarah Bernhardt’ which is grown in a mixed perennial border and has done fine for the past fifteen years without any extra feeding, and has slowly increased in size.


Some people think peony is slightly coarse, but I have no problem with my plants – I just plant other summer flowering plants around them, and their admittedly unexciting greenery is hidden for the summer.  It is important that you do not cut the foliage down straight after flowering, in the way you might with daffodils for example (you shouldn't really do it with daffodils either!) as it will stop any plant growth.  Instead, wait until the autumn, when it will slowly turn yellow and die off naturally.  I always cut the old, dead foliage at that stage and compost it.  If you wanted to, you could give the plants a quick spray with fungicide at that stage but I have never felt the need.
Posted by Unknown at 8:50 PM