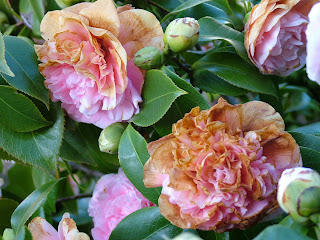 At this time of the year – late winter but warming up towards spring – there is one shrub that should be coming into its own, a shrub that has been relied on to supply colour for the garden and flowers for the house for generations, that wonderful evergreen shrub, the camellia.
But over the past few years things have changed and gardeners need to be a bit more careful about how they plant and use this once ubiquitous shrub.  The arrival of the dreadful flower blight has changed everything.  This horribly disfiguring disease is caused by a very virulent fungus and effectively destroys the beauty of the blooms by browning them almost as soon as they open.  There is no sign of any effective chemical control yet, and those who passion is growing camellias must be throwing their hands up in frustration.  I know the New Zealand Camellia Society has been funding research into control of this nuisance, and overseas societies have also been throwing a lot of money at solving the problem of this scourge of camellias.
This fungous, Ciborinia camellia, lies dormant in the soil where it can live for up to five years, becoming active when a cool period is followed by warmer temperatures and moisture – does that sound like a Wairarapa spring?  It has been known in the United States for over sixty years, and has gradually spread through almost all growing areas.  It has not been in this country so long, being first reported in Wellington in 1993, but once it arrived it spread very quickly. In theory it mainly spreads incrementally, their spores moving only short distances in the wind, but I have friends who garden in very isolated places, and they all report that they have problems with this disease, so I think it is most places in New Zealand – certainly everywhere in the North Island.
There is talk about the way gardeners can be careful with hygiene among the fallen flowers, carefully picking up all infected flowers, even to the extent of taking the flowers that have fallen among the branches of a tree away, and burning them.   I am sorry, but this is wildly optimistic, and will never work in reality, as the flowers are so numerous and flower for months, and many gardeners have more than one variety.  I am no specialist in camellias, but I grow six varieties – too many to harvest the flowers.
There is also some talk of using neem oil to help control its spread, but I think even the most enthusiastic supporter of this wonderful organic spray would agree that it has not proven to be any use against this disease.
So what do we gardeners do?
There is some talk of being able to breed our way out of this conundrum, by finding resistant varieties and breeding from them.  Some recent work at Massey University suggests this might be feasible, but it looks like it will be a long way away before it is commonly available.
At the moment the only tactic to keep the pest at bay seems to be to grow varieties that flower before the disease really gets under way at this time of the year.  This will not please everyone, as some of the most delightful varieties flower in the middle of the season, or later, and the reality is that they are going to carry the horrid brown patches that typify this infection.
One obvious answer it to grow more sasanqua camellias.  These autumn flowering varieties look quite different to the more familiar C. japonica and allied species we are more familiar with.  They have a more open growth habit with narrower leaves and willowy growth in many cases.   They make wonderful wall shrubs, when allowed to splay out in one dimension, but some of the denser growing forms also make very good hedges.