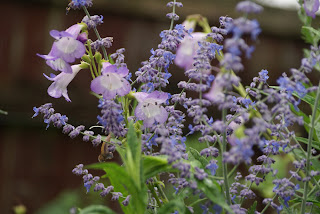 For the last few weeks I have been writing about some members of the sage family – some of the many garden Salvias, both for the herb and ornamental gardens.
In my back garden I have a bit of a problem with a plant that is sometimes called a sage, the “Russian Sage”, Petrovskia atriplicifolia ‘Blue Spires’.
I love the effect this plant has in the garden, with its long spires of mauve-blue flowers springing from finely divided ferny-like silver branches.
This is a great, no-fuss plant; it is not fussy about soil conditions, does not worry about pH levels, and is also very drought tolerant. Mine grows in a semi-shaded spot among other perennials, but I suspect it would be best in full sun, along with most other silver-leaved plants.
Its growth habit is a problem though. It is a sprawling shrub, although usually grown as a perennial. I planted mine too close to the edge of the bed and it sprawls across the other plants near it and then lazes across the perimeter of the lawn.
This year I decided I had to do things better by it. I have always cut it back hard after flowering – and by hard, I mean very hard. At the end of the season it has branches about a metre and a half high, with a slightly larger spread, and I cut them almost right off, leaving stubs of about 20 cm over the winter. Russian Sage is very hardy and will not be damaged by such brutal action over the winter.
This encourages the plant to make good growth in the following spring – too good, in fact, as the soft growth flops all over the place later in summer. This year I remembered early enough in the season, and I nipped all the growths in the bud – tipping them when they were about 30 cm high. It has made an enormous difference. The plant has responded with better branched stems, and a better flowering effect at lower heights.
During the pruning, I found the foliage has a strong “herby” scent – reminiscent of wormwood or one of the other Artimesias – and not that pleasant! Still, I am sure it is now doing good work in the compost pile.
It would be fun to experiment with plantings to associate with this plant. I have it growing with some purple Delphiniums and a clump of the lovely Penstemon ‘Alice Hindley’, as per the photograph above, but it would look even better with pink coloured flowers I think. It also combines well with lavenders and other silver foliaged plants.
Posted by Unknown at 1:48 PM

I find my Petrovskia is very floppy too. I bought it as an unnamed type, and wish I had bought one of the ones known to have a better habit. I might try giving it a second cutting, but I have a short growing season, so I want to make sure it blooms a while before the snow comes, and don't want to delay the flowering too long.