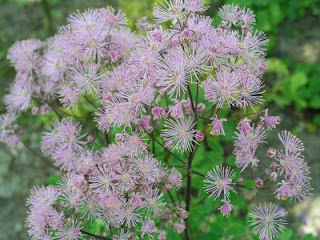 When our elder son spent time here over Christmas, his girlfriend insisted he show her around our garden. They are new gardeners, always difficult in flats, and they have concentrated their efforts on vegetables – but Ana was keen to see how much plant knowledge is absorbed by someone brought up in a nursery.
He did not do too badly, managing to name about half the flowers in the garden, and even surprised me by remembering the name of ‘Strawberry Parfait’ Dianthus. I assume it must have been the association with a dessert that kept it on his mind.
One of the Head Gardener’s favourite plants had them guessing though. She has a few clumps of a perennial growing in one of her gardens, with tall stems that are foaming with small mauve flowers at this time of the year.
The geneticist son had no idea what it was. His research scientist girlfriend thought it might be a different coloured form of “that filler you see in florists’ flowers”. She was thinking of Gypsophila of course, but the two plants have only a passing similarity to each other.
The plant that had them flummoxed was a Thalictrum, one of more than a hundred species in a large genus found over much of the Northern Hemisphere, with representatives also in tropical South America and southern Africa. They are essentially plants of damp or shady places (unlike the Gypsophilas). Their common name is “meadow rue”, but this is a little confusing as they are not closely related to the true rues, but are members of the vast Ranunculus family. The garden forms generally grow to a metre and a half.
They are dainty yet robust plants, usually with maidenhair fern-like foliage, and are ideally suited for a woodland garden, or a border with other tall perennials. The flowers are also valuable for picking, if you can bear to take them off the plants.
One I like is T. auilegiifolium – with divided leaves looking much like a Granny’s Bonnet, and heaps of tiny mauve flowers in early summer.
T. delavayi flowers later in the season, but also has a myriad of light mauve flowers. There is a stunning white form – more commonly found than the mauve one, and called with great imagination, ‘Album' – as well as an amazing form with double flowers. ‘Hewitt’s Double’ has masses of tiny little pom-pom like flowers. It is great for floral work.
A newer variety is quickly becoming a favourite among perennial gardeners – the intriguingly-named ‘Black Stockings’. In a way it is a stock standard Thalictrum – blue-green foliage, thousands of mauve flowers – but these flowers are held atop black stems. It makes a wonderful display in the garden.
There are a number of yellow flowers species. The most commonly found one in New Zealand is T. flavum. It has blue-green foliage and masses of light yellow flowers at about this time of the year.
The Thalictrums are generally no-fuss plants. They will do best in slightly heavy soils that retain moisture. They certainly look best in reasonable sized clumps, and are easily propagated. They look great when grown with other large perennials, especially those with large leaves
Posted by Unknown at 11:48 AM

Very informative post! I've never seen this plant before. It looks stunning when the picture is enlarged. Thanks!