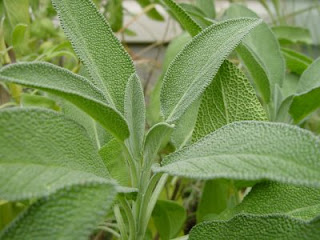 I have already achieved the first of my New Year resolutions – I have planted out my plant of common sage, bought from the friendly herb seller at my local car boot sale. It is many years since I grew this sage, and I am not even sure I know why I have kept not it in the garden.
It can hardly be that it is hard to grow. Common sage, S. officinalis, is one of the easiest of all herbs. It is a small woody perennial, or sub-shrub perhaps, that needs only a moderately sunny place in the garden to succeed. It will flourish in most soils, but prefers slightly less fertility than most other plants. If grown in very rich soil it tends to grow too floppy and lax, and will not last so long. It will do best if restarted every four or five years, as it tends to get a bit woody. It is simplicity itself to grow from a summer cuttings, as it strikes with alacrity.
If you like an ornamental sort of herb garden, there are a number of forms with coloured leaves. The purple leafed variety is probably the best known, but there are also golden-leaved and variegated types around too. These are perfect if you are looking to plant a herb garden on a parterre pattern.
In the kitchen, common sage is probably most-often used in the preparation of poultry or pork stuffing, although it can also be used in sauces and drinks. It has a variety of medicinal uses too – in fact, a recent trial suggests it might be useful in the treatment of Alzheimer’s disease. As a matter of interest, the very name “Salvia” comes from a Latin word meaning “to heal,” and “sage” means wise.
I mentioned last week that I had planted a red flowered sage, a dwarf from of the once-ubiquitous ‘Bonfire’ salvias. Not everyone is keen on this plant, thinking it too much a blob of red pigment. 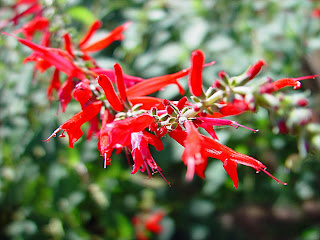 Most people would agree that another red flowered sage, the Pineapple Sage, S. rutilans, is a plant of a totally different kind. It is much larger for a start! If growing in suitable conditions it will happily grow to two metres in a season. It is a slightly frost tender perennial, but it will not matter if it gets slightly hit by cold over the winter as it will happily grow back to two metres the following summer.
And what a two metres it will grow to, with long stems of the most deliciously pineapple-scented leaves, topped with spikes of bright red flowers in summer. The flowers will be raided by bees, and children for that matter, all in search of the honey-like nectar stored in the long red tubes at the back of the flowers.
The leaves can be chopped up and used in salads – both green and the more fruity varieties – and can also be used as a garnish. The flowers are also edible, making a great splash in summer salads as well as giving a honey-sweet taste.
Posted by Unknown at 5:56 PM