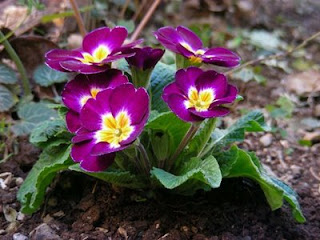 Even in the depths of winter there are joys to be wrought from the winter garden. There are the subtle flowers of winter sweet and Daphne bholua, whose charms, very much in a minor key, would be lost in the cacophony of spring. There are the subdued colours of those under rated perennials, the Winter Roses, members of the Hellebore family. There are also the tiny bulbs that grace the coldest months of the year – the perky little Crocus chrysanthus hybrids, with their sparkling little flowers, and the joyous little reticulate irises, their bright flowers popping up among the grassy foliage.
Then there are the exuberant winter flowering bedding plants – the pansies, poppies, primulas and polyanthus – all of them valuable tools for bring a bit of cheer to what can be a drear time in the garden.
Pansies have been on a roll for the past decade or so, and have surely taken over as the prime flower for this time of the year, and they are deservedly popular. Be careful though – there are many dark forms and the flowers just seem to disappear among the foliage in these darker times of the year. Stick to the lighter colours – the yellows, the pinks and the light blues.
The bedding primulas, mainly forms of the fairy primrose, P. malacoides, are extra valuable as they provide a light effect with their tiers of small flowers. I would not be without some of the white forms in my garden each winter. Poppies I could not live without – their simple flowers also seem to be somehow sophisticated.
But polyanthus hold a special place in my heart. They are one of the plants I remember best from my mother’s garden, and over the years I have grown many varieties, both commercially and for my own fun.
They were originally bred from the simple yellow primrose that grows wild in the hedgerows of England, its light yellow flowers of good size held singly on each stem. It is likely the polyanthus is derived from the oxlip, a hybrid from a primrose/cowslip cross. The cowslip is also yellow flowered, but each stem holds a head of smaller flowers. The oxlip is an intermediate form, with flowers in clusters, each flower between the cowslip and primrose in size. Other Primula species have been involved in the complicated breeding of these winter treasures, resulting in a bewildering range of colours and patterns.
The strongest growing polyanthus I remember from my mother’s garden was the old pale yellow form with deep yellow throat. It was so vigorous the foliage almost looked cabbage like. It was not perhaps the most attractive colour but en masse it looked wonderful. It also had the delightful scent that only yellow forms seem to have.
The big breakthrough with polyanthus came with the introduction of the Pacific Giants strain, originally bred in California. They were uniformly large flowered, had a good range of clear colours and were great performers – for their first year. Perhaps they would perform as perennials in their homeland, but in anything other than the mild climates of California, they struggled to live through for a second year.
From there things only got worse, at least in terms of perenniality. The breeders took up improving Pacific Giants until they came to dominate the seed and bedding markets. Almost all the plants sold in punnets in New Zealand are Pacific Giants, usually from Japanese-raised seed strains. They are good, reliable plants, and you can be sure you will get a good garden display. The bigger garden centres will have these single colours if that is your preference.
Posted by Unknown at 10:33 AM