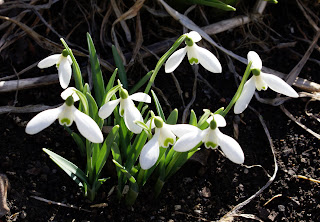 At this time of the year a few fine days make all the difference to how we feel. After weeks of being cooped up in our houses it is really great to be able to wander around the garden, and maybe even accomplish a little desultory weeding. And there are always little treasures to be found as some plants seem to shake themselves out of their winter slumber at the first sign of any warmth.
It should not be a surprise that the snowdrops are among the first bulbs to appear, as their name gives an indication they flower in the middle of cold times. I have often seen photographs of Galanthus, the botanical name for these white beauties, flowering through a break in a European snow drift, but I have to say it is not something I have seen in real life in our more temperate clime.
Early this morning I snuck down to my garden through lawn-crunching frost, to see what the snowdrops in flower at the moment looked like with frost (as close to snow as I am going to get in Wairarapa) but the effect was rather disappointing. I was up earlier than the flowers – they have enough sense to stay closed up in the cold of the early morning, only opening when the sun is warmer later in the day.
There are relatively few species of Galanthus – only 20 or so – but there are many different forms and varieties which are especially popular in the Northern Hemisphere, where their hardiness and ability to flower when no other bulbs are out, is treasured. There is even a name for those who love snowdrops – Galanthophile!
By far the most popular species is the Common Snowdrop, Galanthus nivalis, This is a very widespread species, with wild populations from Russia across to Spain and Sicily. It is also found in the countryside in Britain but these plants are thought to be naturalised rather than naturally occurring. In the wild they mainly grow in woodland and alongside streams, an indication that they prefer humus-rich soil and do not like to dry out.
Florally all snowdrops are remarkably similar – they each have three outer petals that splay out when open, with a ring of smaller inner petals in a tube, each of these inner petals marked with a prominent green spot. There are variations on the theme – in some species the spots are almost contiguous – and many interspecific hybrids.
With some a small amount of variation to play with it is remarkable that plant breeders have played with these plant so extensively, but there are over 500 varieties registered, a truly staggering amount. I cannot imagine how anyone could say with certainty which variety is which without extensive knowledge
Posted by Unknown at 5:38 PM

I've really admired photos of large swathes of these in UK gardens. I had trouble getting any Galanthus bulbs to overwinter in my garden in prior years, but this spring I had the first blooms. My swathe was only 60 cm by 60 cm, and only had about 15 blooms. :) I hope they fill in more next year.