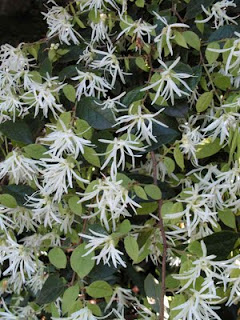 I can tell spring is approaching – the first of the irises and daffodils are out. ‘August Gold’, a lovely dwarf daffodil with golden flowers managed to open on 31 July this year. I guess that makes it ‘31 July Gold’ this year!
I am excited to see these first spring flowers out, but I am less pleased to see another harbinger of spring – sex-mad ducks. At this time of the year the overspill from the nearby reserve cruise the neighbourhood, looking for likely pick-up places. They invariably for a paddle in our swimming pool until shoo-ed away. It must be time to get some sort of cover arranged I think.
A friend sent me a message about a tree she had found when out for a walk, and wondered if I was aware of it. She had spotted an upright growing small tree covered with creamy-white flowers, the branches arranged in a tier-like fashion. She was sure she recognised the flowers as being similar to a plant she grew as a groundcover at her back door, so she hunted through her notebooks to find the name. She came up with Loropetalum chinense. It seemed to her the tree might be a form of the same species she was growing, and she did what we all do nowadays when faced with such a dilemma – she asked Mr Google for his assistance. The tree and the ground cover were soon identified one and the same, forms of a Chinese species.
As it happened I was familiar with the very tree she was writing to me about, as it was growing in the garden of an old gardening friend of mine. His great delight was growing rare and unusual plants, and then bringing them down to the garden centre where I worked to see if I knew them!
This was one he could not fool me with. I had first seen a mature example of this tree in the Massey University gardens when visiting for a course one August. It is a late-winter flowering close relative of the old fashioned favourite Witch Hazel, and has similarly strappy petals, from which it takes its Latin name. In the wild there are both pink and white flowered forms, the white forms having the additional bonus of an attractive scent which seems missing in the pink.
The white flowered form is an elegant shrub which tends to be wider than high. Cuttings taken from lateral branches keep this sideways habit of growth and this trait has been fixed in the ground covering forms.
Over the past decade or so there has been a huge increase in the availability of the pink flowered and purple foliaged, forms of this plant, and the white flowered varieties, infinitely more subtle than their slightly raucous brothers and sisters, are much less seen.
Posted by Unknown at 1:48 PM