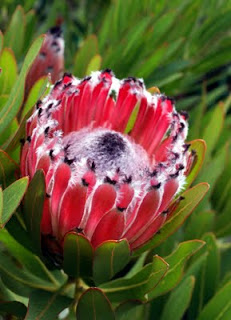 There are quite a number of things we share with our Australian and South African cousins. As well as ancestral links to Great Britain, we also have a joint passion for cricket and rugby. We also share a love of gardening, and a love of the various members of the vast protea family.
It is one of those families that stretches across the southern latitudes, although it is centred on Africa. In New Zealand, are at the very edge of the distribution, our sole representative being the New Zealand honeysuckle, the rewarewa, Knightia excelsa.
As might be expected of a genus named after a king who had the ability to assume a wide variety of shapes, the proteas come in many different sizes and forms. The most familiar, though, and the most commonly planted, are those that the various forms of the shrubby Protea neriifolia, and its near relatives.
An old gardening friend of mine was a fiend for the various members of this family, and I always think of him when I see them in the garden or in the nursery. This weekend I came a cross a shipment of new plants in one of our local garden centres, and had a pleasant half an hour looking at them and making the acquaintance of a few new varieties.
One that took my eye was a new hybrid called ‘Margarita.’ This has quite large flowers of red, tipped with white beards. The flowering season is almost over with this one, but it still looked very attractive. Once the flowering has finished the old flowers are best removed, as this will allow the plant to make more growth and better flowers the following season. It is similar to the older ‘Pink Frost’, but the flowers are much more deeply coloured.
‘Frosted Fire’ is another in that vein, with rich red flowers with white frosted tips. It is more compact in its growth habits, perhaps only reaching 1.5 metres. It is very free flowering and very reliable in the garden.
Most of use are more familiar with the usual P. neriifolia type, with pink flowers tipped with black, and ‘Ruby’ is a selected form in this range, with deeper coloured flowers than usual.
I was really taken with the subdued colourings of ‘Peach Sheen’. This hybrid has flowers like a large P. neriifolia, but instead of being pink the flowers are a most unusual light peachy-orange, with a delightful shininess. The flowers are tipped in traditional black.
The last of the new varieties that took my eye was the somewhat risqué ‘Burgundy Nipple’ – and yes, that is what it is called, but for the life of me I cannot see why it has such a suggestive name! The flowers are not nipple shaped (or should I say, not like any nipple I have ever seen!) and they are not burgundy either. They are pink with the usual black tips, and look very attractive. I guess the name derives from the buds, which seemed to be darker coloured, but I cannot imagine what made the breeder give the plant such name.
Posted by Unknown at 2:41 PM

I just love proteas - how I wish I could grow them in my garden in England!