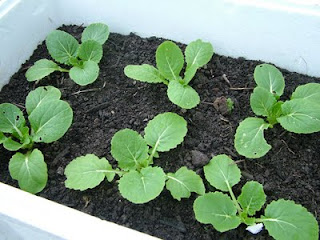 The long warm and dry entry to spring seems to have come to a bit of a halt, with a wet and cold weekend. I was recovering from a nasty head cold so I was only too happy to spend most of the time inside. I had some special seed delivered by a friend, which made me venture into the glasshouse, where I tried not to look at the huge crop of iris seedlings I have steadily germinating. I already have more than I can cope with, and they are still popping up through the soil. There will be some difficult decisions to make in the weeks ahead!
I also spent some time in the office in the main street, and walking around a back street to find some food for lunch, I came across a number of what appeared to be fish trays standing in the middle of a concrete yard behind one of those Asian-owned discount stores. I sneaked a look, and was surprised to see they were each filled with potting mix, and there was a rapidly-growing crop of an Asian green of some kind in each one. In the main they appeared to be one of the bok choy/ pak choy/ choy sum varieties, but there also seemed to be some Asian chives or garlic chives.
I was intrigued to see some a great little vegetable garden in miniature, and tried to talk to the proprietors of the shop about which varieties they were growing, and why they had chosen them above others, but I failed miserably to make myself understood. As a result, I am not absolutely sure which they were growing.
Bok choy and pak choy are perfect plants for growing in containers, as they need to be grown very quickly. They can be grown almost year round in New Zealand provided they are grown in full sun, and are kept well-fed and well-watered. In such conditions they will reach maturity in about six weeks. They are often available as seedlings in garden centres but they do seem to perform better if sown in situ rather than being transplanted – I have found the shift sometimes makes them bolt into flower.
They are a little prone to slugs and snails, especially when young, so make sure you protect them against these slimy pests.
Most Kiwis will have had some experience with eating these once exotic vegetables. They are sort of like a cross between a cabbage and a silver beet – if that sounds at all attractive – and are best suited to quick cooking techniques, like stir frying or steaming.
These green are members of the Brassica family, and as such are prone to the same caterpillars etc. in the summer season, but at this time of the year they should be relatively free from attack.
Posted by Unknown at 9:09 PM